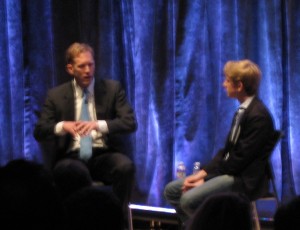 Today at the Startup 2009 conference in New York City, Business Insider’s Henry Blodget interviewed Facebook co-founder Chris Hughes on stage. Hughes recently moved to the city and has been going around to various colleges on the east coast talking to students who have good ideas, but don’t necessarily know how to start companies, as he put it. On the topics of Facebook, the Obama campaign (he was a major player in the online side of it) and even Twitter, he had some interesting things to say.

On Facebook, Blodget of course had to bring up the allegations that the idea was stolen when Hughes was still in college with co-founders Mark Zuckerberg and Dustin Moskovitz. “Not true,” says Hughes. While both Zuckerberg and Moskovitz dropped out of Harvard to move west to focus on Facebook full-time, Hughes stayed in school. But it’s a decision that Hughes admits he kind of regrets. He wishes that he could have been working on it full-time from the beginning.

The back story has been told many times before, but from Hughes perspective, Facebook was started as a way for friends to share what they thought was cool on the web in a trusted environment. And to get updates on what other people were doing. It’s hard to know if that’s a bit of revisionist history (at least the way he’s phrasing it), as those two things happen to be exactly what Facebook is so focused on right now. Sharing things from around the web is finally starting to come into focus with Facebook Connect taking off. And getting updates on what others are up to is the major part of the redesigned homepage which, yes, looks a lot like Twitter — that other service dedicated to status updates.

Speaking of Twitter, during the Q&A portion, someone asked for Hughes’ thoughts on the service. Hughes had apparently only just started using it when he was being interviewed for his Fast Company cover story a couple months ago, and the magazine noted that he had done so, “albeit reluctantly.” But now, Hughes seems quite sold on the service. “I think Twitter is great,” he said before going on about how he doesn’t believe that there can only be one service that everyone uses to share things — something which I absolutely agree with. Instead, he sees Twitter as just one of many new ways to communicate on the web, and believes there will be room for “dozens of applications like this.”

Blodget then got Hughes to talk a bit about his experience with the Obama campaign. Hughes broke it down into simple terms, noting that all the campaign really did was use existing technology to make campaigns more efficient. The key parts of that were ways to help the campaign raise money easier, and also to connect with voters to form an emotional relationship. 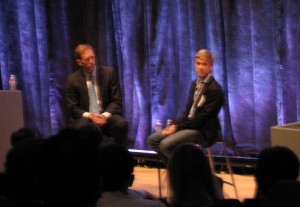 He talked about how right after one of former Vice Presidential candidate Sarah Palin’s speeches in which she belittled what the Obama campaign was doing with its online efforts, the entire team got fired up and starting sending out a mass of emails to supporters. Hughes and the team realized that Palin was an extremely divisive person, and used people’s dislike of her as a way to raise money instantly online. Obviously, it worked to the tune of millions upon millions of dollars.

Blodget wondered if that type of campaign victory was a one-time thing, asking if the Republicans had found their “Chris Hughes.” Hughes wasn’t sure if they had, but guessed that in the next round of major elections, the Republicans will probably have a similar game plan. “We weren’t doing brilliant new things,” Hughes said continuing on that they just knew what would work online.

The talk then turned back to Facebook, where Blodget wondered if Hughes felt the company was doing the right things in order to become a profitable company. Not surprisingly, Hughes is very optimistic about Facebook’s business potential, noting that the company is just in the process of trying a bunch of interesting ideas and seeing what works. He reiterated Zuckerberg’s claims that by the end of the year, Facebook plans to be cash-flow positive.

One audience member asked why Facebook wasn’t doing the type of big advertising site branding that its rival MySpace was doing. “There’s a reason we don’t do that. Ads shouldn’t be in people’s way,” Hughes noted before saying that the best type of advertising is non-intrusive and interesting. Clearly, he doesn’t think too highly of MySpace’s Fanta ads.

Hughes is positive that bigger and better online advertising possibilities will exist over the course of the next few years. And he obviously thinks Facebook will be able to take advantage of that in a very meaningful way, given that it has over 200 million users — and is still growing at a nice rate.

Hughes became an Entrepreneur-in-Residence at General Catalyst Partners back in March.