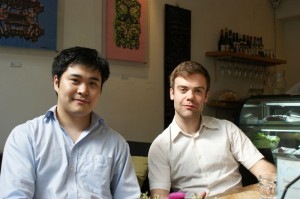 You guys didn’t think I’d go to China and forget to bring you back something, did you? Sillies.

My last day in Shanghai I met with Peter Crawfurd and Michael Yang the baby-faced founders of ShirtsMyWay.com. (Pictured here.) ShirtsMyWay allows you to customize a men’s dress shirt with trillions of possible combinations of details, from the material on the collar to the stitching around the buttonholes. Shanghai-based tailors whip it up, and it’s mailed out to you for $65-$95, including international-shipping.

Right now, the site is running a buy-two-get-one-free Father’s Day special, but TechCrunch readers are getting an additional 10% off their entire orders placed before June 7. Because they aren’t normally set up for this kind of promotion (ahem, I was a little pushy about it all), you have to email your name and the promo code “TechCrunch 10%” to support@shirtsmyway.com within an hour of placing the order to get the discount.

So here’s the bad news for some of you: Right now, the site only makes shirts for men, although the guys awkwardly measured me on a hutong in Shanghai to make me the first-ever women’s shirt. (I still haven’t gotten it, so no word on the results.) For other ladies out there, I figure this is at least a good idea for a cheap and very personalized Father’s Day gift.

Crawfurd and Yang haven’t raised any outside capital to date, and this wasn’t the easiest business to start-up. It took Crawfurd more than a year to find the right tailors and fabrics. Meanwhile, Yang tried twice to outsource the building of the site itself and both times was disappointed, so finally he rebuilt it all himself. In February 2009, they finally launched.

Apparently, it’s going well. In April, they sold about 300 shirts, and with just a handful of employees they break even on way less than that. (They wouldn’t let me say how much less, but it’s substantially less.) Every once in a while, it’s nice to see a business model that doesn’t need huge volumes to work, isn’t it?