Over the past few days, perhaps you’ve seen a few tweets pop up in your stream from people you follow that end with the “spymaster” hashtag. If not, it’s likely you will soon. Spymaster is a new social game based around Twitter in which you do spy-like things such as buy things on the black market, assassinations and put money in Swiss bank accounts.

For doing all of these various tasks, you get in-game fake money, and/or points to level-up to become a better spymaster. But if you try to do too much, too often, it will wear on your body and you will lose energy points. Plus, if you fail in assassination or other tasks, you can get injured and lose money. But the genius of this game is its tie-in to Twitter . You sign-up for the game with your Twitter name using OAuth, and your fellow spies are other Twitter users. So when you attempt to assassinate one of them, it will tweet that out to all of your followers including both of your names — and to the followers of the person you tried to assassinate, if they turn the setting on.

These Twitter notifications are the real key to the game. There are a bunch of activities within Spymaster that you can set up to automatically tweet out when you do them. These include securing a new safe house, buying something on the black market, and even failing in an attempt to assassinate someone, among other things. The more of these you elect to tweet out, the more money you will earn for doing stuff. But it’s a delicate balance, because if you tweet out too much of your activities, you run the very real risk of annoying your other Twitter followers. 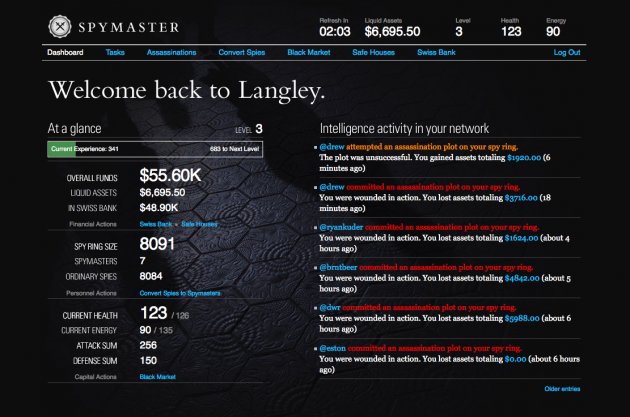 Co-founder Eston Bond is clearly aware of this, saying that with just a very small group of users, some are already finding the tweet updates “a bit noisy.” But it’s easy to toggle them on and off on the game’s site. And after playing around with a few different settings, I find that “Assassinating a user,”
“Securing a new Safe House,” and “Spymaster level increase,” are some pretty good ones to send out as they don’t bombard your users since you don’t do each of those all that often (well maybe assassination, but that’s just a fun tweet). If you turned on every task you did or every black market purchase you make though, your tweet stream can get ugly — fast.

But it’s really quite ingenious. Because the game relies on these tweets, each of which is hashtagged and sent with a URL for the game, word about the game is spreading like crazy with just a select few beta users. The game is being opened up more tomorrow for public testing tomorrow, Bond tells me. And when it is opened up, it should spread even more quickly because a large component is “Converting Spies,” which is taking your Twitter followers (regular “spies”) and sending them direct messages to join your spy network, converting them to “spymasters.” The bigger your spy network, the better your spymaster will be in the game at things like assassinations. 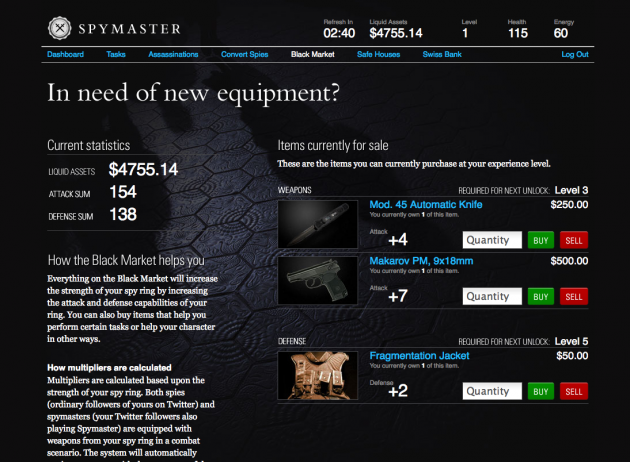 Definitely part of the draw of Spymaster is the whole spy thing — it’s hilarious. Spies who do sign up to become spymasters opt-in to one of the various spy agencies — either the CIA, the British SIS or the Russian FSB. Which group you sign up for helps determine your spy network as well. And depending on which network you’re in, you can wire money to spymasters in other networks, but you will have different (fake) currencies. But the money is all converted with the real-time exchange rates, Bond tells me. Brilliant.

Spymaster is a side project of iList, a classified listing site for your friends. Aside from Bond, it was created by Chris Abad (iList’s CEO), and Albert Choi and Ben Myles. I have a feeling we’re going to be seeing a lot of spymaster hashtags tomorrow on Twitter — hopefully users figure out how to limit their noise. But if they don’t, feel free to assassinate them.

That aspect is another brilliant part of the game — just when I think I’m done playing, I get a message that someone tried to kill me, so naturally I hop back on and try to kill them. It’s beautiful, really. Or, as my fellow spymaster Drew Olanoff puts it, “Just when I try to leave. They pull me back in.” That’s the theme of just about every spy movie ever made. 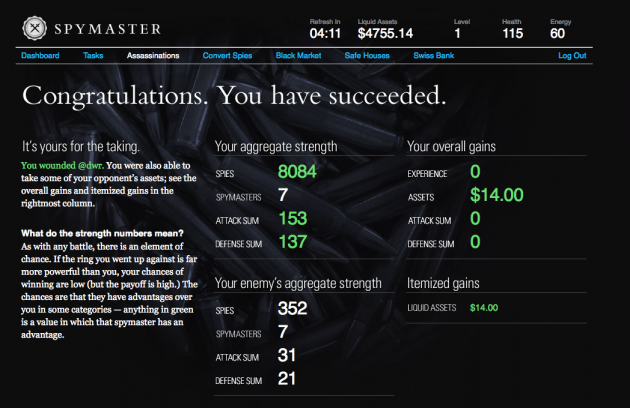