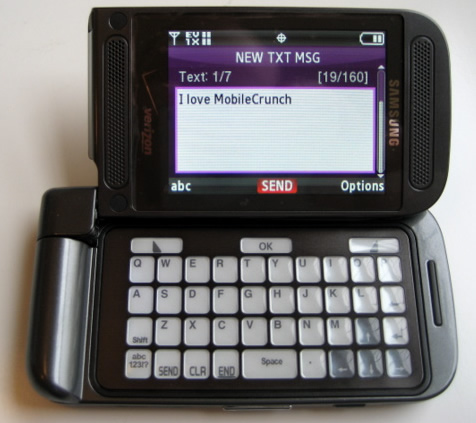 It seems like all the attention these days is focused on smartphones. The reality is, not everyone who needs and uses a cellphone wants a pocket-computer and/or to pay for the hefty data services required to take advantage of said smarties.

With that in mind, it’s nice to see that Samsung is still working on improving its more standard fair / “dumb” phones, if you will. The recently released Alias2 is a primary example of Big Sam’s innovation-meets-pedestrian-handset tactics.

Like its older sibling, the Alias2 sports a dual-hinge allowing the phone to flip open like a traditional clam-shell, as well as in landscape orientation. But unlike like its blood-brother, the most intriguing (not to mention, innovative) feature of this second-gen, messaging-centric flip phone is the inclusion of Samsung’s “Magic Key” e-ink (think Kindle-tech) back-lit keypad.

As Verizon puts it:

Alias 2 adds a touch of magic – a Magic Key keypad using e–ink technology. In phone mode, you see a standard phone keypad. In texting mode, however, the keys magically change into a full, four–row QWERTY keypad.

I’ve gotta say, I really like the e-ink keypad. Not because this particular model is so incredible (nor is it bad for what it is), but more due to the incredible potential this technology has for all “regular” handsets. Being able to punch out a quick text message, twitter update, or even a brief email is considerably easier with a QWERTY keypad, but then again you already knew that. 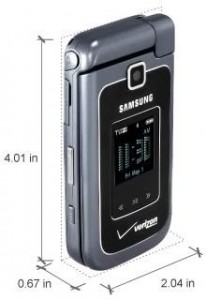 The Alias2 feels a bit hefty in your hand and/or pocket @ 4.34 ounces and seems especially top-heavy when holding the phone up to your ear on a phone call. The handset is also pretty large (4.01″ x 2.04″ x 0.67″) for a flip phone – but that tends to be the case with any dual-mode phone. The specs aren’t going to blow your pants off, but they’re more than adequate for the “Not looking for a smartphone, but still want a nice phone” audience that makes up just about all of the non-tech obsessed world. All in all, it’s sportin’ a 2.6″ QVGA screen, a 2.0 megapixel camera, and dedicated hot keys for one–touch access to Bluetooth, text messaging, voicemail, camera, voice commands, games and alarms.

A bit of an (unexpected) surprise is the inclusion of visual voice mail. For $2.99/month, users can see a list of callers, including the phone number called from, date, and duration of the message. Here is what VZW has to say:

Now you can manage and check your Voice Mail messages on screen with Visual Voice Mail. Scroll through your messages, pick the ones you want to listen to, erase or archive. You can call back, text and add to contacts directly from the Visual Voice Mail screen.

Access Voice Mail with one button and get instant playback.

Did you get that “mailbox is full” message again? Now you can easily archive your messages in multiple places. Keep a copy on your device’s internal memory or on a removable memory card. Or you can send the audio to an email address via the Picture and Video option.

Visual Voice Mail is only available in the National Enhanced Services Coverage Area and only on select devices. 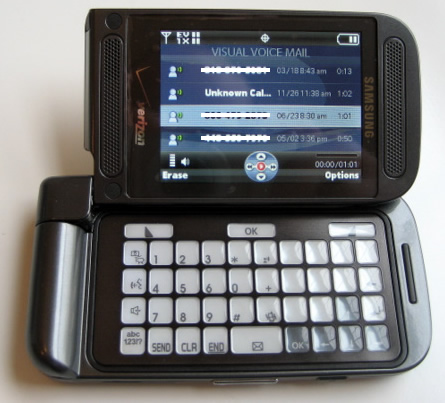 Being able to see this info and selectively listen to messages is a pleasant feature, and hopefully one that will be widely available across all mobile carriers and future mobile devices in the very near future.

In terms of the other good / decent stuff, battery life has been respectable (sorry, no hard data collected), the speakerphone is relatively clear (but not so great for listening to music, although “passable;” the standard close-ear speaker is so-so), web browsing is relatively quick over Verizon’s touted 3G network (but limited as its got a standard WAP browser), and text messaging is a snap thanks to the “magic” keyboard.

As for the less than stellar features, the inclusion of a 2.5mm headphone jack is just plain inexcusable, especially since the phone is marketed as a “V Cast Music Phone with Rhapsody,” all but limiting its musical enjoyment to borderline quality stereo Bluetooth headphones or wonky 2.5mm cellphone headsets. The screen, while a decent size, is not the sharpest thing I’ve ever seen, but hey, you get what you pay for.

Speaking of which, the Samsung Alias2 is currently running $79.99 (w/ 2yr agreement). The magical QWERTY elevates this handset to “solid choice” status for anyone looking for a text-centric flip-phone on Verizon Wireless.
What we like: