Have you ever been annoyed by the fact that Wikipedia has a wealth of textual information but no videos and hardly any pictures? Take the Wikipedia article for Sony’s Rolly, for example, where the device is depicted as “an egg-shaped digital robotic music player.” If you have never seen a Rolly before, this cryptic description won’t help much. After reading about it in Wikipedia, you’ll then need to look it up on YouTube or Google Image Search to see what it actually looks like.

This is where a new service called Navify comes in. Launched in public beta today, Navify intends to enrich Wikipedia by adding pictures, videos and user comments to each article. And it actually works pretty well. Look up “Sony Rolly” using Navify and you not only get the original Wikipedia text but also hundreds of related pictures and videos (pulled in from Flickr and YouTube) by clicking on the tabs Navify puts on top of each article. Look up “Pulp Fiction” and the service retrieves the Wikipedia article itself plus screenshots, covers, posters and trailers from the movie. You get the picture.

The site is built upon Wikipedia’s platform with the idea of being a complementary media and discussion layer, similar to the way Friendfeed enables discussions about tweets originating from Twitter. Like Wikipedia, edits are anonymous; anyone can edit the images and videos associated with an article without registering an account. Navify CEO Alan Rutledge says what triggered development was the thought: “If people around the world can help each other by building a free collaborative encyclopedia, couldn’t we make it more useful for everyone by illustrating it together?”

What really sets Navify apart is the threaded comment system that allows visitors to discuss the nearly 3 million articles in the English database. Each article is a community waiting to happen- Barack Obama on Wikipedia received 770,000 visitors in the last month alone.

Just like Wikipedia, Navify appeals to a very broad target audience, but it looks like just the right online source for people like bloggers, journalists, scientists, students etc. who need to have various kinds of information and data related to a certain subject in one single place. 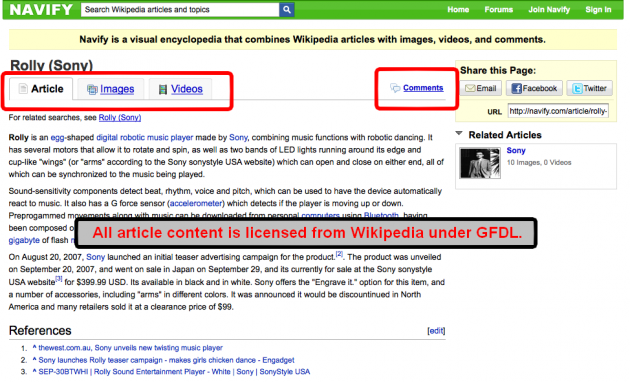 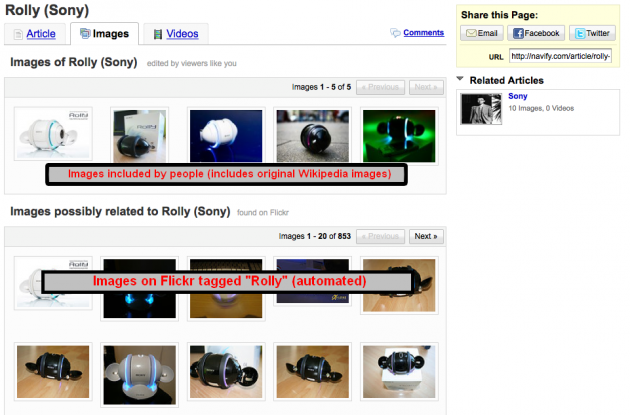