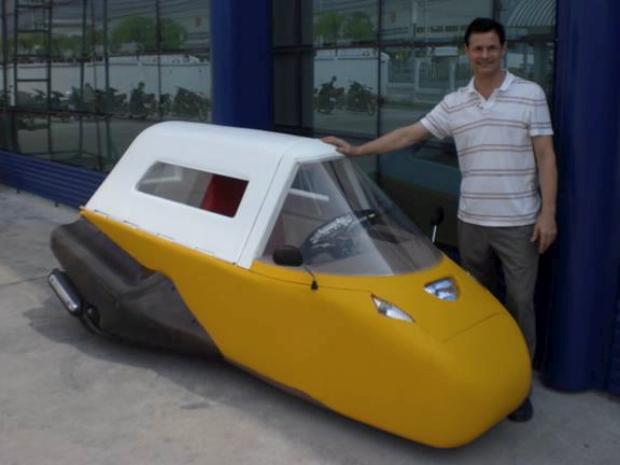 Instead of relying on superhuman strength via a panic-induced rush of adrenaline to be able to lift your car off the ground, why not just buy a car that only weighs 300 pounds to begin with? The “Spira4u” is such a car, made mostly (90%) of six-inch foam and with a top speed of 70 miles per hour. Oh, and it gets 100 miles to the gallon.

If that’s not enough to seal the deal, you should know that the Spira4u can float. Not that you’d use it to actually drive around in a lake but if you careened off of an overpass into a lake, you and your car wouldn’t sink to the bottom.

If the car looks a bit cramped at 10 feet long, 5 feet wide, and 4.3 feet tall, you can remove the 30-pound roof for some fresh air. And lest you think this isn’t a family car, the Spira4u has room for two with a tandem seating arrangement. Just make sure your family only has, at most, two people in it.

The Spira4u is currently competing in the Progressive Automotive X Prize, and creator Lon Ballard is planning on producing the vehicles in a factory he owns in Taiwan. No word on exact pricing or availability yet, though.

Here’s a video of the Spira4u careening around in donut-like fashion: