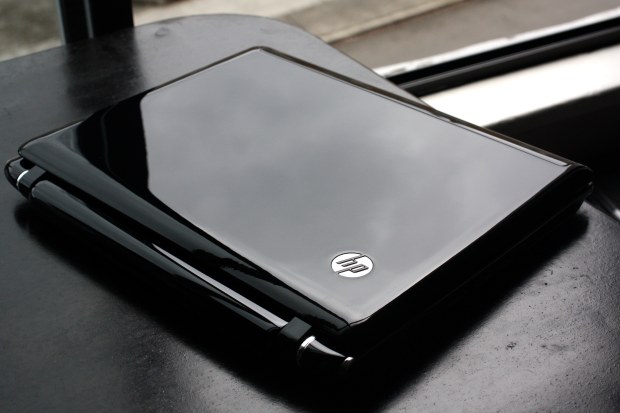 When HP and AMD pitched the idea of a laptop with price and capabilities between those of netbooks and regular notebooks, I was intrigued. Although many have been seduced by the netbook’s siren song, I’ve always been put off by their micro keyboards and tiny, low-res screens. Yet do I really need to lug my MacBook Pro everywhere I go when I’m just planning on editing a couple posts and checking my email?

The dv2 is HP’s answer to this dilemma. Almost as small as a netbook, and almost as powerful as a regular laptop, they said it would be the best of both worlds. Of course, the risk was that it would have the worst of both worlds instead. That turns out not to be the case, and the dv2 is a smart little machine — but it’s still far from perfect.

The dv2 really is in a class of its own — though I mean that literally, not in a sense of excellence. It occupies the price gap between netbooks and regular notebooks, and comparisons to either are going to be kind of misguided. So keep that in mind when you find yourself comparing one or the other to the dv2 in your head.

HP has gone to great lengths to get the form factor right, and they’ve done pretty well. It really is very thin (less than an inch), with a knife-like profile marred somewhat by the chubby battery case at the back. It’s got junk in the trunk, essentially. Not that there’s anything wrong with that &mdsah; but it does disturb the otherwise flat form of the thing. It opens and closes with a magnet, although it’s not weighted enough on the bottom part that you can open it with one hand. 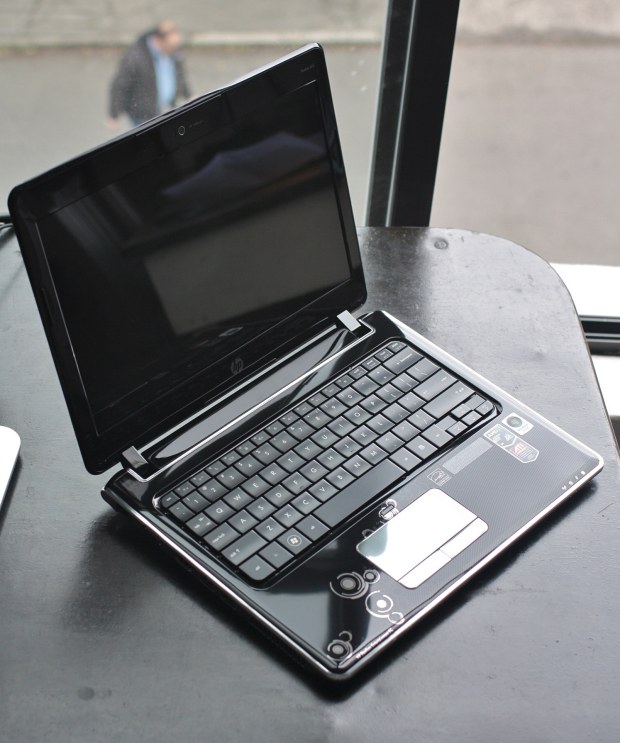 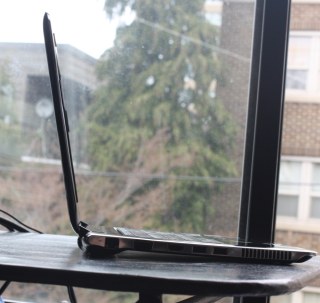 The keyboard is difficult to judge. It seems big enough, although it’s off-center, which irks me. Still, the keys are a good size (if a bit close together) and they’re all there. Most of the compression seems to have occurred on the left side, where your esc, tilde, and tab keys have shrunk significantly. Other than that, it’s as good a keyboard as I’ve seen on any small-form-factor laptop.

The 12.1″ 16:10 ratio display is excellent. Its 1280×800 resolution means you can watch most 720p content full-sized, and I find it to be very sharp, although it has a very limited vertical viewing angle for getting color right. It’s also covered in a reflective coating like every other laptop these days, for god knows what reason. I’m typing this on the dv2 now, and I can read the reflections of the signs across the street from me. Earth to laptop manufacturers: let us choose. At least the display is bright enough that it works fine in all but the worst lighting situations (that is to say, all but the one I’m in right now in this cafe).

The insides of the dv2 are much better than your average netbook, though not quite as fast as the mid-range laptop platforms that start at $1200 or so. The processor is the brand new AMD Neo, which is making its debut with the dv2, and although it’s clocked the same as your average Atom (1.6GHz), it’s not quite as micro-sized and limited — not to mention it’s 64-bit. AMD has a history of doing more with less hertz anyway. It’s also got up to 4GB of RAM; the one I have has 2GB, but 4GB is actually going to be the standard in the US. Lastly it’s got a 250GB hard drive, which stands out quite a bit when compared with netbooks, which generally come with a fraction of that. 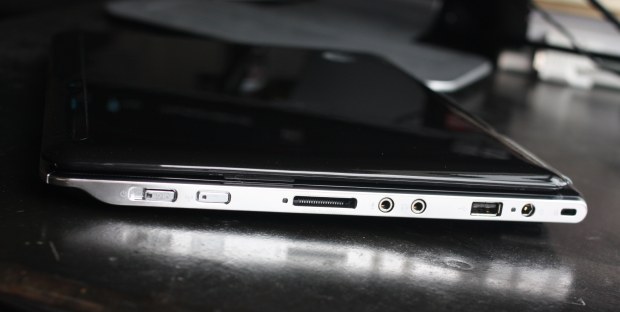 It comes with Vista, which is good and bad. What’s good is that it actually runs quite well, something I wouldn’t expect from any netbooks out there (and some regular laptops). The bad news is that it’s Vista, and if you want to take advantage of the HP Mediasmart capabilities, you’re going to have to keep it that way.

Because it has a discrete video card, it’s no stranger to some light gaming, as long as you adjust your expectations. HP and AMD invited me to try out a real game, so I installed World in Conflict. Unfortunately, even with a reduced resolution and settings on medium, I could hardly get a playable framerate. Better to stick with last generation stuff for now; WoW and games from a year back probably will run a lot better. 4GB of RAM vs my 2GB would help, but I doubt it would double the framerate. 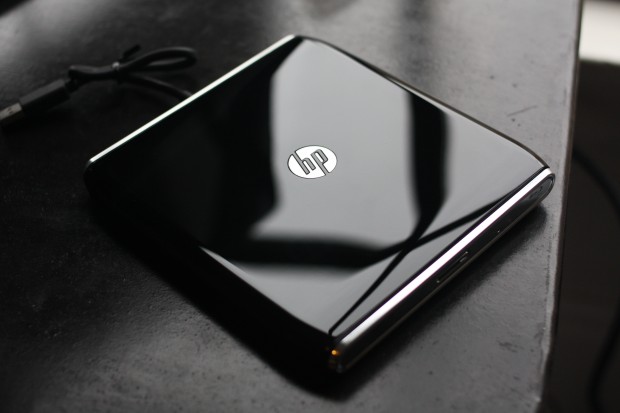 The incredibly sexy Blu-ray player that comes with the dv2 is excellent, and since the screen actually supports 720p, the dv2 suddenly becomes a very nice little portable media machine. It’s questionable whether the battery will hold out for the length of a whole movie, though; I give it a little over two hours under medium-to-heavy load, and three on light load. Playback was fine but I did get stutters here and there; again, my model had less RAM than yours probably would, so keep that in mind. 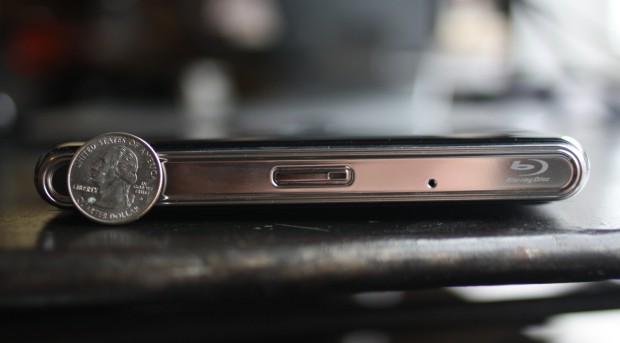 So far, so good. There are some little issues here and there but no deal-breakers. Unless you really need a nice trackpad. Because the dv2 doesn’t have one. I mean, it has a trackpad, but it’s pretty bad. First of all, the material it’s made of seems to require extra effort to drag your finger along. Of course, once it’s all covered in grease and smudges, as it will be since it’s shiny chrome, you’ll be able to glide a little easier (kind of gross to think about). The pad is super-wide for some reason but not particularly big, so you’ll be doing a lot of multiple strokes to get things done. The size is strange, because there’s clearly more room available on the handrest area. 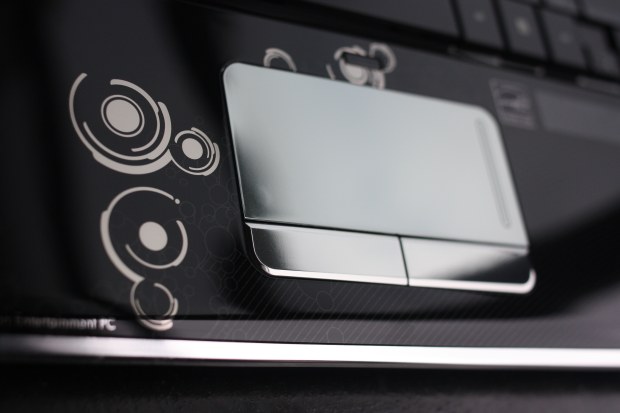 It’s got an unpredictable little scroll area on the right side that’s difficult to use without looking, which kind of defeats the point. The buttons below the pad take a considerable amount of force to push, and I found myself avoiding them altogether. Most infuriating was the “drag lock” which apparently is impossible to disable. I like to tap instead of using a button, and this trackpad is definitely not good for that. Sometimes it’s super-sensitive, sometimes I’ll tap several times to no effect. Of course, all these problems are solved by simply using a mouse (my Bluetrack Mini worked perfectly), but part of the draw of larger and better laptops is the improved trackpads. Whether this is a driver problem or what is immaterial: it’s there and it’s annoying.

Lastly, while Vista may run fine once it’s gotten its great bulk up and running, it took fully four minutes for a cold boot to drop below 15% CPU usage. I’d rather have 7 running on this thing, so honestly I’d just drop RC1 right in as soon as I got one of these.

Bottom Line
I think that HP has a good thing here, and although other companies are planning on releasing similar styles of mid-size/ultrathin notebooks in the future, the dv2 is actually here and leading the charge. It’s not a paragon, however, what with its problematic trackpad and questionable 3D performance. Those problems aside, though, it’s got a great form factor, lots of storage space, the keyboard is solid, the screen is great, and honestly starting at $750 I think that this is a great deal. It’s an excellent second laptop for when you need to be a little more portable, and because it’s got plenty of hard drive space it works as a little media laptop as well as a barebones browser-and-email machine.