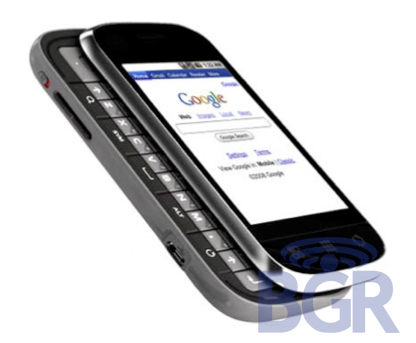 We learned the other day from a slightly shady-looking leaked document that the second version of the G1 will be hitting T-Mo some time in the fall. Believable, but the picture for the phone looked all wrong — a little too Ocean-y for us (though we love that phone) [Greg says: I was totally right about the G1v2 image in that document being a fake placeholder]. But BGR appears to have unearthed a picture of the real thing, and it looks a lot more likely to us.

The very HTC-like keyboard (you can tell from the width of the keys), obscured as it is, looks nice, and you can barely tell but there are three touch-buttons at the bottom, possibly with placeholder icons on them. BGR has graciously put their watermark directly over them, but you can see they’re a bit anonymous and probably not final. After all, the “home” and “back” functionality are integral to Android and I doubt they’d use such arbitrary designs to represent them. So we don’t see this as a final design but it’s certainly more slick-looking than its predecessor.

It seems that Bigfoot will be dropping in October at Wal-Mart for just under $150 with a 2-year contract, and probably similar terms directly from T-Mobile. I’m sure we’ll learn more before then, so we’ll keep our eyes open.