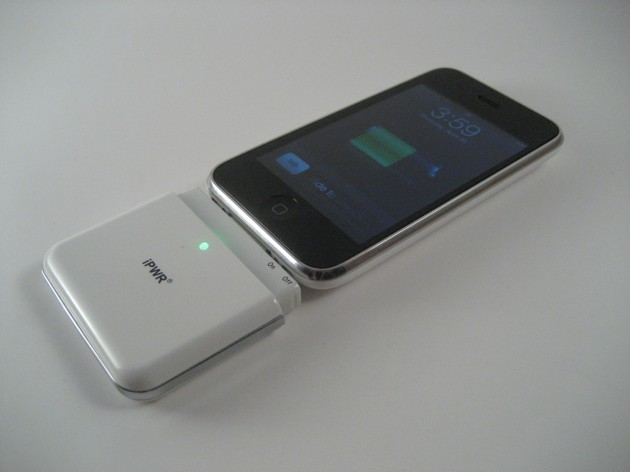 Short version: The iPhone may be good at a lot of things – but one thing its definitely not known for is its good battery life. It definitely has better battery than some devices (we’re looking at you, T-Mobile G1), but it still pretty terrible. If you’re a heavy user, you’ll want a backup battery – but there are oh–so–many of them to choose from. Which one’s the right one for you? If you’re carrying an iPhone and an iPod or two, the iPWR backup battery is a solid pick.

Longer version: Rather than piggybacking onto the back of the iPhone like the Mophie Juice Pack or FastMac iV, the iPWR extends out from the bottom? The obvious downside to this is the added bulk, adding right around 2.5 inches to the length of your phone. However, this form factor has its advantages: unlike the backpack-style packs, the iPWR can charge both iPhones and iPods (5th Gen, 3rd Gen Nano, Classic, or Touch). With the capacity of the iPhone still rather limited, I’d imagine that a ton of folks are still carrying around an iPod with the bulk of their libraries en tow. For these folks, the iPWR should work swimmingly.

Coming in at 1800mAh, it’s one of the more powerful batteries on the market. On a single battery charge, we were able to recharge our iPhone battery to 100% one and a half times.

On an odd side note: we’ve seen this exact same battery pack sporting at least one other brand. We’re not sure if there’s a factory out there rebranding these things, or what.

At right around 55 bucks through most online retailers, it’s the cheapest 1800mAh iPhone battery we’ve seen thus far. It’s about 25% cheaper than the Richard Solo 1800, though it lacks the LED flashlight. If you’re looking for a no-frills backup battery that does the job for just about any iProduct you throw it at, the iPWR backup battery won’t do you wrong.