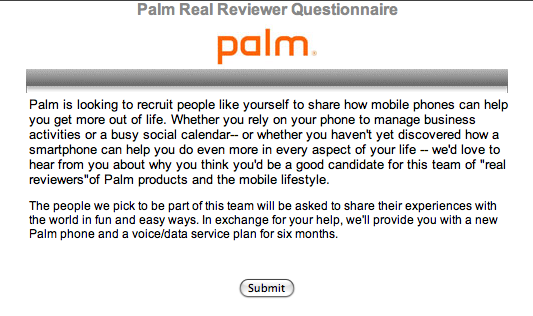 If you’re a social site maven who happens to be dying to dabble with the Pre, Palm wants to talk to you.

Palm has just announced a “Real Reviewer” program, in which they’ll be giving a select chunk of socialites a “current-model” Palm phone (read: probably the Pre), along with six months of service.

This is by no means the first time a phone company has proffered up a device in exchange for reviews; companies loan bloggers, journalists, and reviewers of other titles their latest gear on a daily basis. But that’s a bit different – reviewing stuff is part of our job description. That said, this isn’t the first time a company has opened up testing to the non professional, either. Nokia, for example, started up the “Nokia Pilot” testing program last year. However, I think this may be the first testing program specifically targeted at the Twitter/Facebook/Indie blog group – and if they pick their participants correctly, this could be a genius move. Major blogs and magazines carry a certain level of inherent authority, but any influence they have is rarely due to a personal connection with the reader. People tend to trust the opinions of people they know, even if they only e-know them. Get the kid who has (and communicates with) 5,000 followers to rave about the Pre, and Palm will have piqued the interest of a lot of folks they’d have otherwise missed.

If you get picked, you won’t be getting something for nothing – but what they’re expecting isn’t exactly grueling labor. In exchange for the half-year of free Pre, they want you to share any and every thought you have about the device on your favorite social network, blog, or whichever other soapbox you prefer.

If you’re interested, applying isn’t too tough. Answer 9 or 10 questions about yourself, ranging from “What phone do you currently have?” to “How would you describe yourself in 1 word?” (Ooh, ooh! Go with “delicious”! If nothing else, it’ll creep them out enough that they’ll pick you out of fear.), and then wait until Palm picks their favorites come May 8th. What have you got to lose? Sign up here.