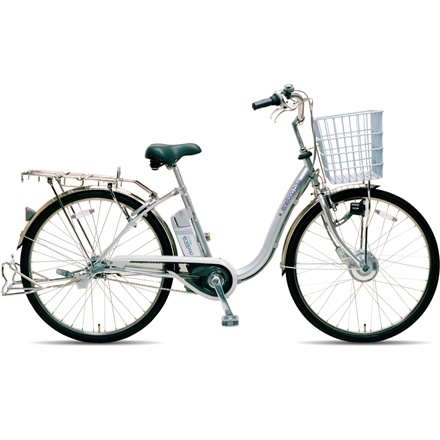 Sanyo has released a new “eneloop”-branded and battery-assisted bicycle [JP] that’s aimed at people (in Japan only for the time being) wanting to replace motorbikes and mini vehicles with a “green” alternative. The so-called CY-SPG226’s battery is powerful enough to let the bike travel about 85km with a single charge (which takes 3.5 hours).

Sanyo says it achieved this impressive driving range by developing a battery that automatically recharges (at least to some extent) when the driver brakes or drives downhill. Other modifications include a front basket that can carry up to 10kg (3 times more than the baskets in other Sanyo hybrids) and tires that are 20% wider than previous eneloop bikes.

Sanyo says it aims at selling the bike to cost-conscious commuters, courier companies and maintenance firms but doesn’t expect to sell more than 300 units for the time being. The bike, which weighs a massive 32kg, costs $1,300 in Nippon. But when can we expect them appear in stores outside this country?