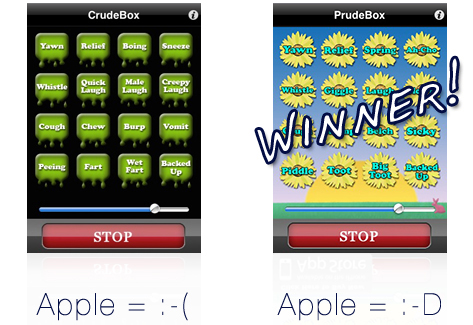 Hot on the heels of the Great iPhone Baby-Shaking App Debacle of 2009 we have another example of the crack Apple iPhone App Review Team in action. Alkali Media, a little programming shop run by three college grads, decided to make a crude soundboard and entitled it, fittingly, CrudeBox. The app had a number of clever sounds including, but not limited to, farting, peeing, burping, and a “sproing” sound to simulate the male member reaching tumescence. Unfortunately, all of this was a too much for Apple’s App Review team. Alkali writes:

Apparently the seemingly tame soundboard, bodily sound effect application was far too offensive for Apple’s strict moral guidelines. We unanimously agreed that maybe it was the female orgasm sound that set the app over the edge. The orgasm was replaced with a cartoon-like spring sound. The kind you hear when a male cartoon character finds himself awkwardly aroused. The application was submitted a second time. Seven Days later we received word that once again Crudebox was too obscene and offensive for the iTunes App Store. After moving past the inevitable feeling of frustration towards Apple, we decided to poke some fun at Apple’s app approval team. What if we were to submit the same sounds as before, except this time around we make the app look extra flamboyant and change the name to the ironically appropriate, Prudebox?

Eight days later we would received an e-mail from Apple stating that our recently submitted application, Prudebox, has passed the approval process and is now ready for sale. After a name change, and an overtly flamboyant reskin of the application (complete with a pink bunny and a a fleeting sunset), we were able to get our app approved. To this day, we’re still questioning what sort of quality assurance is in place for Apple’s quality assurance team. I’m sure you can only imagine what other quality apps you’ve been missing out on thanks to Apple’s ever-so-stringent approval process.

So now you can download PrudeBox without complaint. But CrudeBox, obviously, was too much.

What can we ascertain from this? Clearly the review process happens on a desktop – as evidenced by the failure of the team to notice that the Shake-a-Baby app kills a baby when you physically shake the iPhone – and that the team is probably so overwhelmed that outright but light profanity (“Pissing” appeared in CrudeBox) in a UI is automatically dinged while visual cues like sunshine and bunnies gets the nod. In short, the review team is run by pre-schoolers who love violence (iShoot is a great app and is rightly considered one of the best but it does involve blowing things up with nukes) but don’t like pee pees.

Perhaps we should do a kill-the-baby app set in a land of woodland sprites and fluffy bunnies? When you shake the phone, the bunnies will eat a bunch of babies and rainbows will appear. Then the app will fart. Anyone know any good programmers?

Update: MobileCrunch’s take on the story