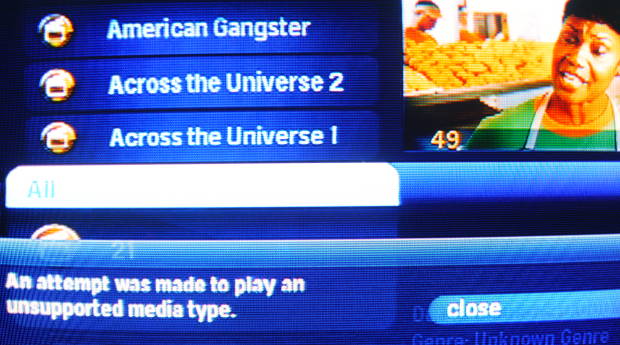 Somehow in the hoopla that surrounded the latest Moxi HD press release, I failed to notice that the recently added DLNA media streaming capabilities does not support AVI or MKV files. This is huge. Suddenly I’m looking at this sexy DVR like it has chlamydia. I don’t want anything to do with it. The lack of AVI or MKV support makes the DVR kind of useless in my house.

Sure, TiVo’s implementation of media streaming is far from perfect. The system actually copies the video file onto the TiVo hard drive, which is annoying but supports nearly every file format including the two in question here.

The Moxi is a DLNA compliant device but that doesn’t mean that it will stream AVI or MKV file formats as I just found out. I’ve tried TwonkyMedia, Tversity, and Windows Media Connect without any luck. It’s kind of a moot anyway as a tech support guy kindly pointed me to the user guide (pdf link – search for WMV) where it doesn’t list those file formats anyway. He also confirmed numerous times – I was being thorough – that the Moxi HD DVR does not support AVI streaming in anyway, shape, or form.

Two of the listed supported file formats stream fine: WMV and MPEG-2. However, I couldn’t get any MPEG-4 files to stream. Honestly, I only have two files of that format anyway ’cause everything is in AVI or MKV format so it could have been me.

There is no reason why this gigantic oversight cannot be corrected by Moxi with a simple update. No one would convert their entire library of videos to WMVs when a TiVo or hundreds of other devices support the file formats fine. It doesn’t matter how slick or cool the Moxi looks on an HDTV when basic functionality isn’t there.