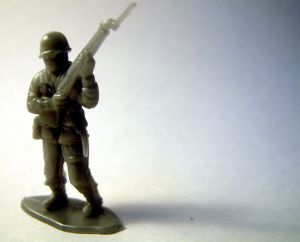 Monolith and WB announced the availability of the “Toy Soldiers” DLC today for the Xbox 360, PlayStation 3 and PC. It’s the first of three DLC packs for F.E.A.R. 2: Project Origin and we can expect the “Elite Powered Armor” map pack in May. What makes this even better than it being free is the bitchin’ soundtrack that plays over the trailer. Kudos to you, Monolith.

The F.E.A.R. 2: Project Origin “Toy Soldiers” map pack allows players to experience multiplayer from a terrifying new perspective as they are reduced in size to be only inches tall and battle inside a pinball machine, a gruesome hospital lab room, and a playground sandbox.

* FullTilt: Players battle inside a retro 1970s era pinball machine “Snake Fist” style as they use flippers, targets, spinners and pop-bumpers for cover in fast paced action. The multi-level playfield and authentic sounds set the mood for destruction.
* Cockroach: Featuring a blood drenched hospital room filled with heart pounding action, players can climb up electrical cords, laboratory equipment and pill bottles in a tightly connected environment.
* Recess: Players wage mayhem from the top of a giant sandcastle to the cockpit of a toy bulldozer.