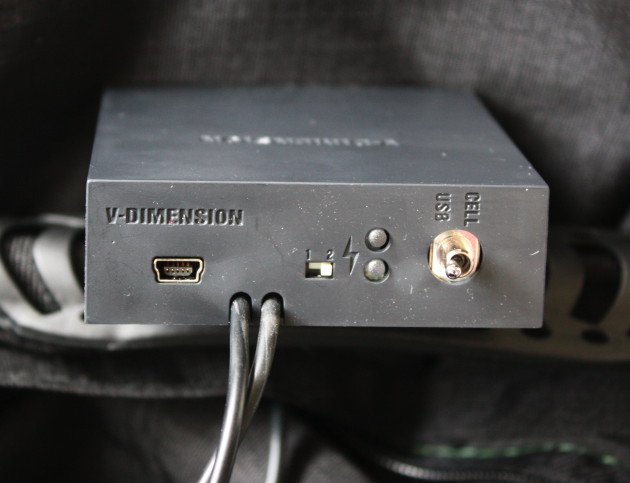 Quick version: V-Dimension’s Helius Solar backpack provides portable power and an ample amount of storage to those who are constantly on the move. While it won’t charge your laptop, it will charge your iPhone/iPod, Samsung, Motorola, LG and Nokia devices. And anything with a mini-USB port or adapter, which is just about everything these days.

Long version: Backpacks are an invaluable asset for technophiles and I’ve gone through my fair share in recent years. I long for the days when my hand-me-down Jansport was enough to pack my comic books, toys and whatever else youngsters carry around. These days, I have to carry around my laptop, an SLR, video camera, cell phones, cables and any other accessory I deem important.

My Lowepro Fastpack is still my #1 pack these days, but I’m always open to whatever else is out there. One of the issues I have with backpacks these days is that most of them have lackluster build quality. The seams rip apart easily and I run the risk of something falling out because it simply can’t handle the weight of a five-pound laptop.
I was a bit skeptical when the Helius arrived at the office, but the solar charging feature was too good to pass up. I can say, however, that it’s held up quite well so far – sometimes carrying up to two 15-inch laptops.

In terms of functionality, the Helius has five external pockets with two lining each side and a larger compartment on the front that also houses the solar panel and charging unit. The side pockets are great for cell phones, MP3 players, point and shoot cameras or anything roughly the size of a Nintendo DS Lite/DSi.

Very thin dividers split the main compartment into three sections that holds a 15.4-inch laptop, magazines, books and anything else you can manage to cram in there. The main external compartment has the standard fare pen slots, key ring, mesh pocket, etc., but it also comes with a vinyl pouch that houses the various tips and USB cables needed to charge your gadgets. The battery pack is also in this section and takes up a bit of room.

The battery pack can be charged via the solar panel or from an electrical outlet. It takes roughly three hours to fully charge the Ni-HM battery and somewhere in between six and seven hours via the sun. The box has two modes: Cell and USB. Cell is used when charging an external device while USB mode retains any stored energy and is also the desired setting for charging the solar panel. You can also charge devices while the solar panel is being charged up. VD mentions that the iPhone takes up to seven hours to charge this way and I’m inclined to agree, but I never made it past four hours because we haven’t had much sun lately.

One last thing about the comfort of the Helium: it’s surprisingly comfortable but I wouldn’t put more than 10 lbs into it. The padded shoulder straps are wide and don’t dig into your shoulders and the padded back makes for comfortable use over long periods of time.

At $120, I’d be a bit apprehensive about buying the Helius, but it works as advertised and the pack itself is sturdy enough for everyday use. However, the solar panel is in a vulnerable spot and it could be cracked if you’re not careful.