Mog, a music-centric blogging network that launched back in 2006, is evolving once again. The site has relaunched its homepage at Mog.com to serve as an authoritative destination site for music news. It has lofty goals, aspiring to become something akin to a ‘Huffington Post for music’ with a constant stream of content that lures visitors to come back multiple times a day. Coming up with that much quality content isn’t normally easy or cheap, but MOG has at least one ace in the hole: its entire editoral staff consists of only six people, and its contributing authors aren’t getting paid – they’re just writing about what they love.

MOG has built up a thriving network of bloggers over the years, who produce upwards of 5,000 music-related blog posts a week. Most of these bloggers are found on MOG itself, using the site’s own publishing tools to share with other members (called MOGers). The site has also forged deals with around 300 external blogs, driving traffic to them by syndicating portions of their content on MOG in return for allowing MOG to serve as their ad network. Between all of these blogs, MOG sees around 5.7 million unique visitors and 40 million page views a month. 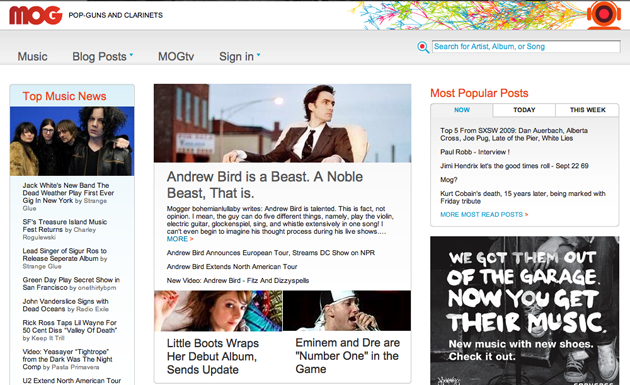 Before now, MOG has largely failed to capitalize on its expanding base of bloggers – users browsing its homepage would be shown the most recent posts, with no system present to filter for quality or subject matter. As the site has grown, this stream of posts has become nearly unusable (some of MOG’s 5,000 posts are not written by particularly adept writers), which had led to a poor user experience. To put it bluntly, nobody ever really visited the MOG homepage again after seeing it for the first time.

Now MOG is looking to take advantage of the content its users are producing. The new homepage features around two dozen widgets, each of which will focus on a different topic in music news. A handful of these – namely the top news stories for the day – will always remain at the top of the page, but users will be free to rearrange or remove the remainder of the widgets, which focus on topics including album reviews, upcoming music festivals, and must-see music videos. Each of these is created by the site’s human editors, who cull through posts on the MOG network and pick out the best ones, tweaking the headlines as needed to appeal to a large audience. 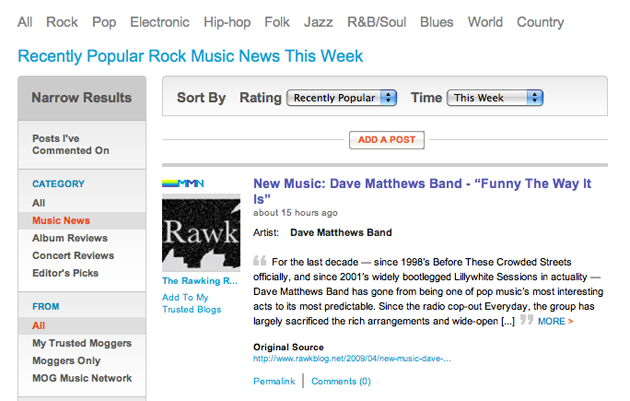 Beyond the homepage, users can now browse through a section dedicated to other blog posts, but unlike the old system (which forced users to wade through junky content), stories will now be surfaced using an algorithm based on the popularity and reputation of their writers. Users will also be able to vote up their favorite posts, giving less established bloggers a chance to make it to the spotlight. The interface is getting an overhaul to match its impressive (but still mythical) music streaming service, which is still in the works but will not appear for at least another few months.

MOG isn’t going to be the only company vying to be the music world’s news site of choice – competitors include sites like Pitchfork and Stereogum as well as old standbys like Billboard. But MOG has a leg up on more traditional sites because it has such a large flow of new content that it can provide without hiring a team of dedicated writers. So even if the road to popularity is long, MOG can probably just sustain itself until its competitors die out.

In honor of the site’s relaunch, MOG has also put together a rap battle song (embedded below), written by founder David Hyman and performed by Sam F. And while I’m no rap critic, it’s not half bad.