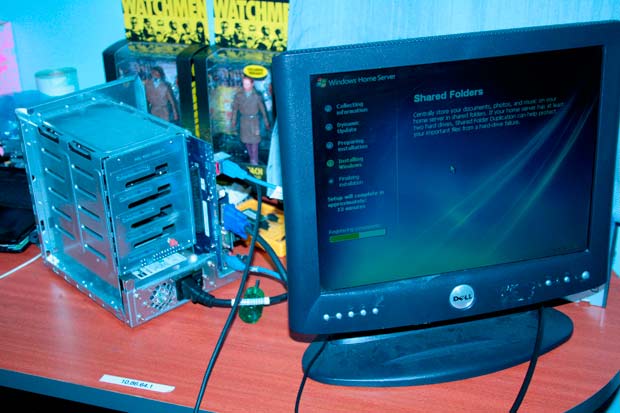 Windows Home Servers are great. Really, they are. I have been running a box that I built myself out of an old AMD Athlon XP 1900+ for almost a year and half now with zero complaints. It seems a guy on Microsoft’s forum site has managed to convert his Thecus N5200 NAS into a WHS. This hack isn’t super easy, but if you have a NAS laying around and don’t want to drop the cake on a pre-built WHS, it might be worth trying for a step up in functionality.

Basically, you are going to install WHS on the box. Easier said than done ’cause you need to have the NAS boot to the installer first, which also involves installing a VGA port on the headless box so you can see what you’re doing. Plus, there is the little thing about getting the right drivers for the controllers within the NAS. I know, it’s not easy but WHS is a solid piece of software and worth the trouble.

What is easy however, is installing Windows Home Server on an old computer. I threw mine together in an afternoon with random parts of old systems complete with 6 parallel hard drives. WHS makes RAID’n easy. Give it a go.