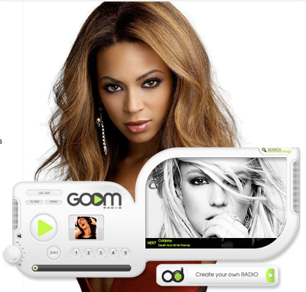 One of the reasons that Internet music streaming services Pandora, imeem and Last.fm have been able to build large audiences is because they are run by people who have a passion for music. Or should I say, a passion for music beyond pop music. With Goom Radio, I’m not so sure.

Not only is Goom clearly trying to play the popular music card with a website littered with the likes of Coldplay, Kanye West, Beyonce and Britney Spears, but it promises to have “passionate programmers” and DJs. I don’t know about you, but I had two core reasons that I stopped listening to traditional radtio long ago: Crap music, and DJs. Goom, apparently, sees those as strong suits.

Not that there’s anything necessarily wrong with that. Pop music got that name for a reason, it’s popular. And popularity on the web means users. And users means people you can serve ads to and get paid — which is Goom’s business model for the time being, according to VentureBeat.

To be fair, you can also tailor your own stations based around your musical tastes, just as you do on the aforementioned Pandora. And you can upload your own music to the service to stream yourself from anywhere, just as you can with imeem . And the services promises high quality with its proprietary HD sound. But Goom is clearly putting resources into hiring “experienced” DJs, conducting interviews and even dishing out news (presumably about music). And it has raised a $16 million round of funding from Wellington Partners Venture Capital, Elaia Partners and Partech International to help it do all of that.

The service features the tagline “redefining radio for the digital generation,” but I wonder if the other services that already exist in the field haven’t already done that? Instead, Goom looks to be a way for the digital generation to rediscover traditional radio. And at a time when web radio is struggling to monetize against high streaming royalty fees, is bringing in DJs and programmers really the best use of funding?

You can sign up to be a part of Goom’s beta launch on its site.

Update: Goom contacted us to let us know that one of the key advantages it feels it has over its competitors is its solid executive team, which consists of a team with more than 20 years of experience inside both the realms of radio and technology. This includes CEO Rob Williams who previously was the President and Market Manager for Clear Channel New York. A fair point, though that doesn’t change my opinion about how the product is being sold to the public.