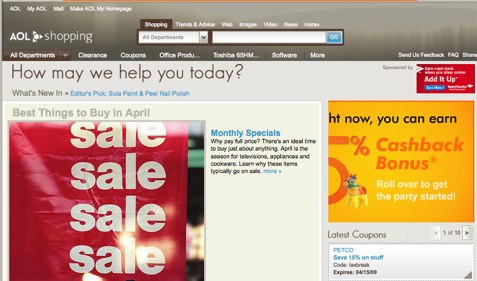 In the midst of the recession, consumers are either cutting back on spending or actively looking to reduce expenses. And with retail sales plunging during March, decreasing by 1.1% compared to February, it looks like retailers are in for the long haul when its comes to the virtual drought in consumer spending. What better time for AOL to completely overhaul the design of its comparison shopping site, AOL Shopping, to promote recession-friendly deals, coupons and sales to consumers across its site. Coincidentally, Yahoo’s comparison shopping site, Yahoo! Shopping, has the same features, but wrapped up in a different interface.

AOL Shopping’s homepage showcases a “monthly specials” slideshow, featured prominently above the fold of the site. Users can click on to a “monthly specials” page with the best deals of the month, up-to-date coupons and sales, or they can flip through the slideshow to see AOL’s recommendations for what products have the best deals. For April, AOL says televisions, appliances and cookware are your best bets. Also, each page on the site displays coupons to the right side of the page, which are fairly random and don’t correspond to what you are looking at on the page. For example, I was doing a search for “Tory Burch Flats,” and was shown a coupon for pet supplies at Petco.

AOL Shopping has confirmed that the site has signed on new advertisers for the relaunch of its site, including Dell, Discover, Sephora, Bank of America, Barnes & Noble and Sears. AOL’s advertising model for the site has also become more flexible, with advertisers now given the option to run ads for a one-day section, site-sponsorship or a year-long ad deal. Given the state of the economy and the downturn in ad spending, it’s not surprising that AOL Shopping chose a more open approach to ad sales. Comparison shopping sites generally make money through advertising and affiliate fees, which can be charged as a flat fee or as a fee each time a user clicks through to the retailer web site or completes an action.

Yahoo! Shopping’s site, whose recession-friendly features appear to have been launched prior to AOL’s overhaul, features an above-the-fold sales feature on the front page, leading consumers to a sales and deals site called “Yahoo! Deals.” Almost identical to the AOL’s “monthly specials” page, “Yahoo! Deals” has coupons, deals, and sales sections. Yahoo!’s search filters are more comprehensive than AOL’s, allowing you to narrow your search results by price, color, and material (I was looking for shoes). AOL doesn’t appear to have any search filters. But Yahoo! doesn’t give you the coupons next to your search results like AOL Shopping now does. It does appear that some deals and sales are exclusive to each site. AOL featured a deal on a Calphalon pan, which I couldn’t find on Yahoo. But I found a deal for a Nintendo game on Yahoo for $20, which was listed at $27.99 on AOL.

Both sites offer competitive deals, coupons and sales for consumers. But Yahoo!’s is more user-friendly because of superior search filters, search suggestions in the search box, and the ability to see results in a grid view or list view. It appears that AOL is playing catchup to Yahoo! in adding the recession-friendly features. They may also be trying to play catch up to Yahoo!’s number of visitors. According to comScore, Yahoo!’s shopping site received 23.4 million unique visits in March with AOL only receiving 5.4 million uniques in the same month. 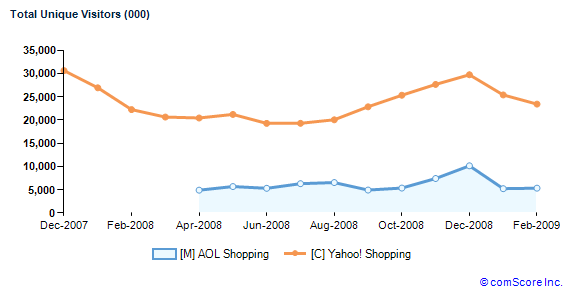 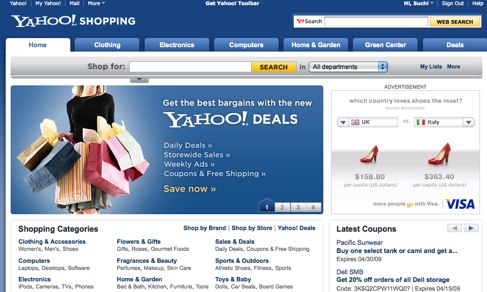 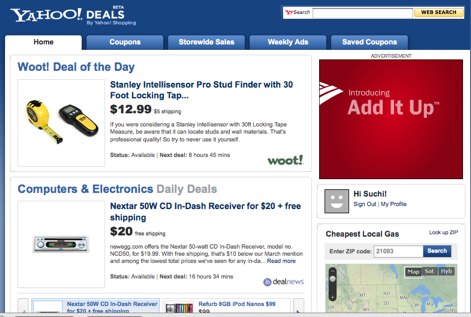 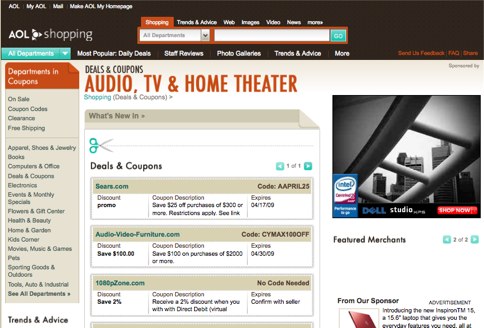