With the popularity of Twitter and the proliferation of symbiotic applications designed to feed off the Twitter phenomenon, it’s becoming increasingly uncommon to see startups taking a stab at creating a totally new “micro-blogging” platform. That’s why it’s always fascinating to see how people are trying to reinvent the Twitter wheel. TribeHQ has launched its own twitter-like platform, but with a twist. TribeHQ is a “micro-jobbing”platform: a micro-blogging social network that enables members from the same occupation (or “tribe”) to converse with each other and with employers about potential job opportunities.

Unlike Twitter, which uses ungainly hash tags (#hashtags) as a convention to indicate what a particular Tweet is about, TribeHQ uses job-matching algorithms to align members seeking a new job with opportunities that match their career goals. Employers can post jobs and profiles of their companies. Tribe members can then have real-time conversations with employers (but only using 140 characters or less) and are automatically matched with jobs available to members of their tribe. TribeHQ integrates with Facebook Connect to import contacts. TribeHQ’s real-time conversations with employers is forward thinking when it comes to Track, because it combines real-time updates with filtering and mining of content.

When you sign onto the site, you can join a tribe, a.k.a job profession. For example, I joined the “Journalists/ Reporters/Correspondents Tribe.” Unfortunately, there were no other members of my tribe on the site. And there were no job postings for my tribe. In fact, there were only three job postings, in sales, recruiting and web development. If the site is going to gain a following for recruitment purposes, it needs to post more job opportunities.

TribeHQ’s idea of offering a niche platform for micro-blogging job postings and connecting people in the same industries is definitely worth a try. But the website has a few hurdles to jump before it can become viral. With the massive popularity of Twitter, that has become the go-to platform for pretty much anything to do with micro-blogging. It’s going to take some significant marketing efforts to convert job seekers and employers to add a new platform. This is why so many startups are focused on creating applications based off of Twitter’s API. TwitterJobSearch is a good example of this. TwitterJobSearch uses semantic search to figure out the content of a tweet and gives you job postings based on job type and job title etc. TribeHQ is also trying to add the element of professional social networking into the mix, which LinkedIn has already mastered. But TribeHQ has a good idea. With enough followers and job listings, it could really take off. Maybe it should think of tapping into Twitter. 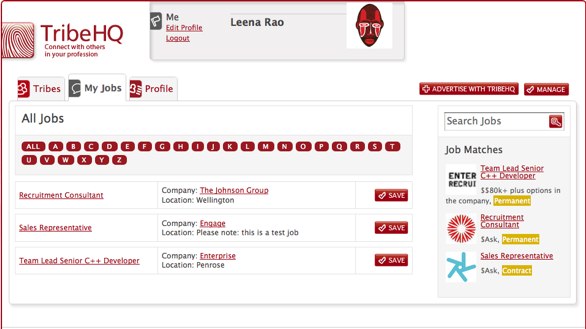