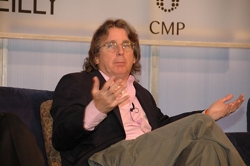 It’s no surprise that bands and musicians are trying to harness the viral power of Twitter. Music is a big part of Twitter’s content, as we’ve written about in the past. But recently the Bay Area band Moonalice, whose lead guitarist is well-known venture capitalist and Elevation Partners co-founder Roger McNamee, staged several concerts on Twitter and has seen some impressive results using Twitter as a platform.

On April 3, Moonalice, which also includes ex-Saturday Night Live guitarist G.E. Smith, held its first live Twitter-integrated concert at a venue in San Francisco. Immediately following each song during the show, Moonalice’s sound team took the song’s audio, digitized it, uploaded it and then “Tweeted” about its availability — all before the group finished playing the next song at the live concert. The sound team used TinyURL to Tweet a link to a site where users could listen and download the song. Moonalice saw such a resounding response from followers on Twitter and fans that the band decided to do the same thing for the next two concerts. Because of the live Twitter integration, Moonalice says that its seen 3000 downloads of its music in the past week and a half (from just the tweets and retweeting).

Moonalice got 3,000 downloads and nobody outside of Silicon Valley has even heard of them. Imagine what would happen if a major band or performer did the same thing. It appears that some bands and artists are catching on to the buzz behind live music action on Twitter, including hip-hop artist Knaan. It’s only a matter of time before this trend becomes viral.