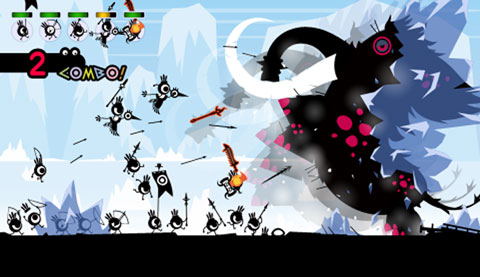 Lending credence to the rumor that Sony is doing away with the UMD drive on the next PSP comes word, beit rumor, from Ars that Patapon 2 will only be released digitally next month. You can, however, pick up physical product at your local game shop, though. Or so says Ars’s mole. In total, there are three ways of getting Patapon 2 for your PSP.

So the deal is that P2 will be released on PSN for $15, but you can go into your local GameStop, Best Buy or whoever and pick up a Patapon 2 PSP case that has a download voucher and nothing else. If you choose to go down that route then you’ll have to fork over an extra $5, which we assume goes towards the cost of manufacturing and shipping empty cases. The third alternative according to the Ars mole says that certain retailers’ websites will sell just the download codes as well.