MySpace users have been noticing a new button in their Nav Bars this afternoon, allowing them to switch between the site’s traditional ‘Full’ view and a new view, called ‘Lite’, which strips out the customization and media that the site’s profiles have become known for. When reached for comment, MySpace confirmed that they have been quietly testing the ‘Lite’ feature in the US today, explaining that the product is primarily geared towards members who don’t have access to broadband connections, which is a common issue with international users. The product has been available in India for the last few days, and will roll out to US members later this week (with more international support coming in the following weeks).

MySpace has long placed a heavy emphasis on allowing users to customize their profiles with media-rich content (a feature that has been occasionally abused by some over-zealous users). Many MySpace members include YouTube clips, music playlists, and flashy photo slideshows on their profiles, which can make pages nearly unusable when attempting to browse MySpace from a slow internet connection, especially since many of these files have to load from servers beyond MySpace’s control. With MySpace Lite, these issues shouldn’t be a problem. 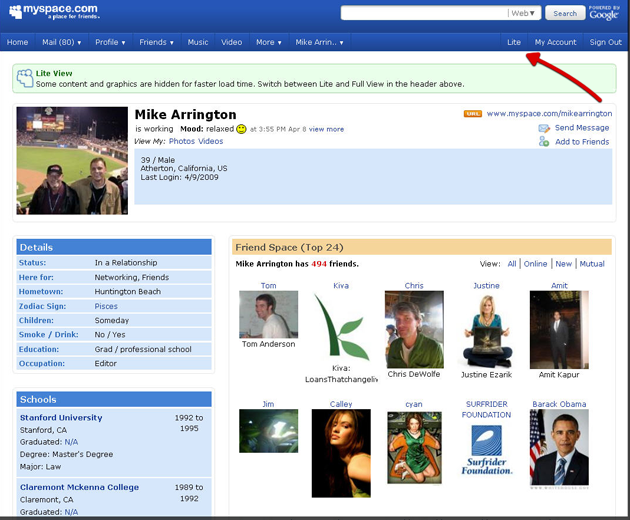 Among the elements that are excluded from Profile Lite are the ‘About Me’ and ‘Who I’d Like To Meet’ sections, user interests, comments, and third party applications. That may sound like a lot, but users will still be able to view most personal details like relationship status, friends, and status messages. The company says that when Profile Lite is launched for everyone, it will also include the site’s music module (which presumably isn’t as bandwidth-heavy as video content), but that most other media will be excluded. Future versions of Profile Lite may include the ability to customize exactly which profile boxes should be shown in ‘Lite’ mode.

MySpace may be marketing ‘Lite’ profiles towards international and dial-up users, but it has one potentially more far-reaching implication: it gives users the ability to browse MySpace with a single, unified interface. One of the long-standing advantages Facebook has had over MySpace is its clean, structured appearance – Facebook allows a small degree of customization, but users always know where to look when they want to find a member’s bio or their list of friends, which isn’t always the case on MySpace. Granted, some MySpace users are drawn to the site specifically because they want to be able to load up their profiles with movies and photos, but most of us would at least like the choice to ignore this content. Now, MySpace is giving us a way to do exactly that, even if they aren’t too eager to promote it that way.