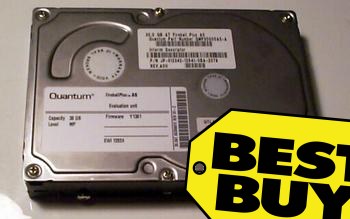 Once upon a Best Buy, in a sealed Western Digital VelociRaptor 150GB drive box, there lived an ancient 30GB drive called a Quantum Fireball, from Maxtor. It sounds like the beginning to a really nerdy fairy tale, where maybe the Fireball ends up outperforming the Raptor, but no. It’s more of a corporate ripoff story. The poor guy this happened to was told he could return it, then told he couldn’t, then told it was Western Digital’s problem, then told it was Best Buy’s problem. So he’s going to make it everybody’s problem except his by filing a police report and having the charge reversed. Good for you, guy.

The story at the Consumerist notes that the only way to be sure is to open your product at the store. I’ll tell you what, considering what people have found inside Best Buy boxes (my college roommate found pubes in his surround sound setup), I’m going to take that advice, but only when I shop there. I’d go to Fry’s, but those jokers set up 80 miles away in Renton.