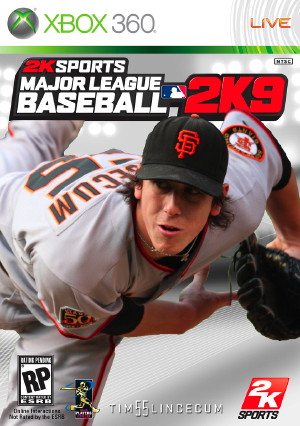 I don’t like baseball and if that makes me un-American then so be it. But I do watch during the month of October and root against the Yankees – assuming they make it to the postseason. So, baseball video games aren’t necessarily my forte, but I know a good thing when I see it or, in this case, play it. However, the die-hard baseball video game fans might not take kindly to this year’s MLB 2K title.

I managed to find a copy of MLB 2K8 to note the differences with 2K9 and I can see why some fans are shaking their heads this year. 2K was looking for a way to bring baseball to the masses by changing two fundamental features: the batting system and pitching mechanics. They’re both much easier to use than last year’s but you can revert back to the old pitching system.

The batting system is dead simple. Move the right toggle back and bang it forward when that meatball comes down the middle. That’s it.

The new two-step pitching sequence goes a little something like this – pick the corner you want to paint with the left toggle and mimic the pitch sequence with the right toggle while timing the windup for maximum velocity. It’s easy and anyone can do it, but you can always revert to the old three-step process in controller settings. Except that doesn’t seem to work as well as it did last year with the exclusion of gestures being shown.

The online side is beefed up with 2K Living Rosters that updates all MLB happenings within 24 hours, like, trades or injuries. Franchise mode is slightly improved with 30-player roster support and updated menus, but not much else. Play-by-play is top notch and if you were some luddite sitting under a rock you’d think you were watching a real live baseball game except for players walking through each other and other random glitches that pop up far too often.

2K made some major changes to this year’s MLB title and they might get some flack for it, but it’s brought in someone like myself who doesn’t really like to play baseball games and I’m pretty sure that was their main goal – attract more chumps. The bottom line for MLB 2K9 is that it’s fun to play and I keep going back for more.