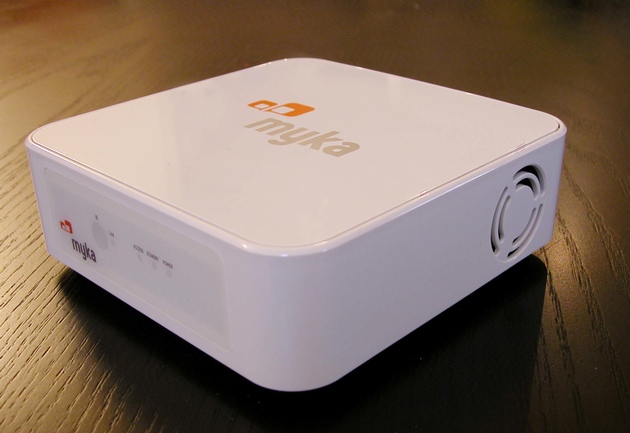 So, Myka. Remember what it does? Right, it’s a little set-top-box that plays high-def videos on your [presumably larger than your computer monitor] TV; it can download using BitTorrent right onto its built-in hard drive. That, or you can manually load previously downloaded videos onto it via a thumb drive or through a network. Oh, and now it plays “independent, foreign and cult films you can’t find in video stores” from EZTakes‘ 5,000+ movie library. Neat-o, said the cow. Then he mooed, powerfully.

Right, so the Myka box itself doesn’t ship till later this month, but at least it’ll launch with a legal source of videos of which to tap into; can’t go around saying, “Hey, load up all those Blu-ray rips you downloaded from The Pirate Bay!” in the marketing materials, now can you? (Yes, even if that’s what’s implied here—this video that I’ve embedded shows a THOR-encoded version of some dumb Star Wars movie. THOR is the progenitor of ESiR, if I’m not mistaken.)

Looks neat, yes. If I had money I might even consider buying one, seeing as though I’m big on watching movies I find here and there. WINK WINK!