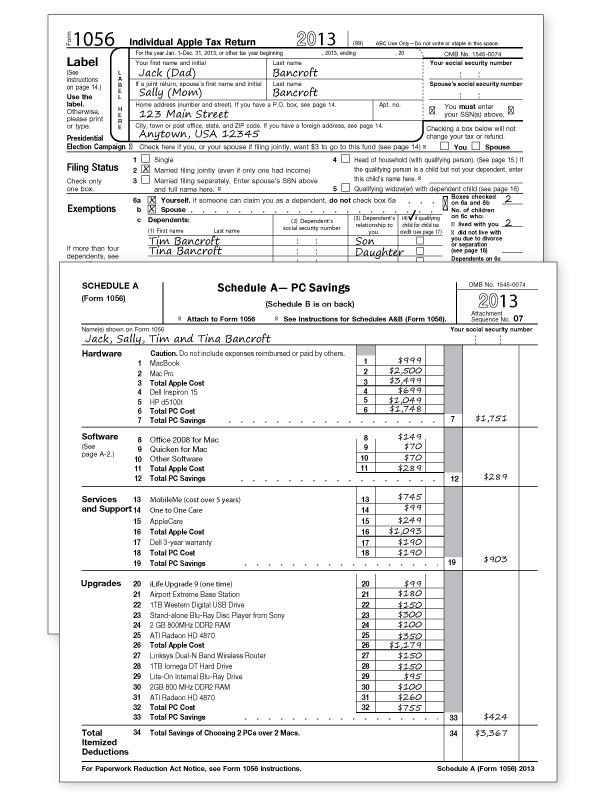 I’m starting to suspect that the doofus-filled commercials are designed to confuse and confound Macintards into frothing wildly like Neil Cavuto on Fox News.

A fake tax return, posted on the Windows Team Blog describes the total cost of ownership, after purchasing arbitrary upgrades willy-nilly and assuming you own two Microsoft Office licenses for PC anyway, is $3,367 over the price of a Mac. Fine. We get it. Macs are as expensive as human growth hormone. But what is this document really showing?

Nothing. Assuming you have a few weeks of PC downtime in there, a few conficker infections, and an issue with Excel that completely blows out your hard drive, most PC users are looking at considerably more time lost in PC use as compared to Mac use. PCs are cheap because everyone wants to buy them and there’s no money in them anymore. It’s like saying matches are better than a lighter because they’re cheap and don’t require refills. This is absolutely true, but when you run out of matches, the opportunity cost of schlepping to the bodega to get a new pack far outweighs the firebringing power of a Zippo.

Somewhere inside Redmond a marketing team is chuckling to themselves. Why? Because they changed the script. They’re talking about money and when it comes to Macs, you can’t play there yet. Wait a few months for a $999 MacBook, however, and the game will really be afoot.