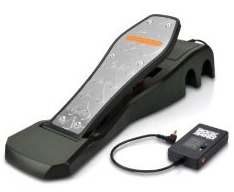 Not content to let Guitar Hero: Metallica hog all the double-bass glory, you’ll soon be able to add a second kick pedal to your Rock Band setup. The recently-announced “Universal Rock Band Replacement Kick Pedal” from accessory maker PDP is available for pre-order on Amazon for shipment June 1st.

The pedal costs $24.99 and comes with an adapter to hook up a second pedal:

Now the big question is: which game will be the first to offer some sort of bracket that allows you to attach two guitars together Jimmy Page-style?