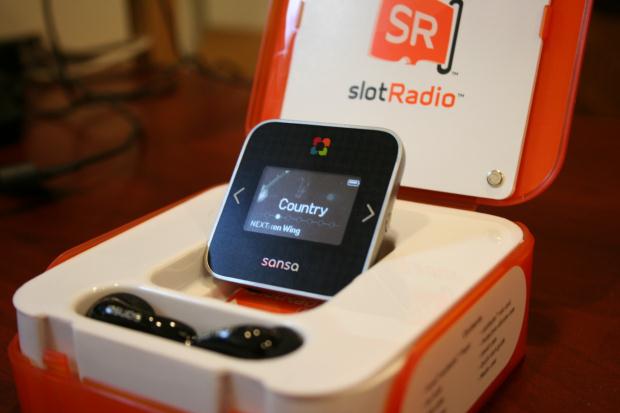 Short Version: SanDisk’s slotRadio player provides good value as it pertains to content, with the $99 kit featuring 1,000 popular music tracks and an attractive hardware player. The “radio” portion of the slotRadio name should be given close attention — you can skip tracks but you can’t go backwards, and everything’s played in random order, just like conventional radio.

Long Version: If you read CrunchGear regularly, you’re probably savvy enough to know how to load songs on an MP3 player. If that’s the case, the slotRadio player isn’t for you — unless you’re open to the idea of a portable device with a ton of music on it that you didn’t download yourself and can’t access track by track.

So here’s the deal: you pay $99 and you get the cracker-sized slotRadio player and a microSD card filled with 1,000 popular songs from Billboard’s music charts. The player has an On/FM/Off switch, volume up and down buttons, a combination next track/play/pause button, and two buttons for toggling back and forth between playlists. The hardware looks and feels pretty nice. The brushed aluminum body is solid and there’s a sturdy belt clip on the back side. The 1.5-inch OLED screen is greyscale but is super readable and there are cool little animations depending upon which playlist you’ve selected. 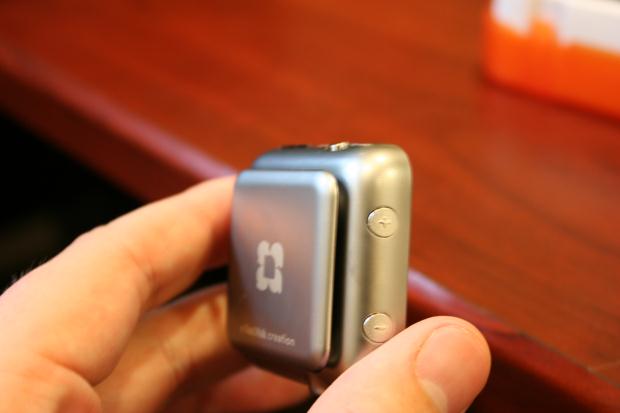 Think of the playlists as “stations” — there’s Rock, Country, R&B/Hip Hop, Contemporary, Alternative, Workout, and Chill — with all 1,000 songs appearing on one or more of the playlists. The player itself has no on-board storage, so you can either buy preloaded cards from SanDisk or you can load your own tunes on a blank microSD card.

You start playing a particular playlist and if you don’t like the song you’re listening to, you can skip it. If you move to the another playlist, whichever song you’re currently listening to will pick up where it left off when you select the playlist again. You can not, however, go back to a previous song no matter which playlist you’ve selected. Similar to how the real-life radio works, things just move forward and in real time. The only difference is that you can skip tracks you don’t like. It’s very similar to online streaming audio services like Slacker or Pandora, except that you get unlimited skips.

This, in my opinion, is the biggest strike against the slotRadio idea. It’s simple to a fault. The two big left and right buttons on the face of the device are used to navigate between the seven playlists when they should be used to toggle back and forth between songs. Instead, the small-ish play/pause button on the right side of the device is used to skip tracks. Even the noobiest of noobs will wonder why they can’t go back to the song they just accidentally skipped over. If there’s a second iteration of the player, SanDisk should seriously consider letting people go back to recently-skipped tracks.

Once I got the hang of this newfangled concept, I immediately thought, “Oh boy, I’m gonna dump these 1,000 songs on my computer.” No, no, no I’m not. The microSD card that comes with the slotRadio player is locked down tighter than Peter Ha’s bicycle and the music on that particular card can only be played on the slotRadio player. I’m sure that was a concession by SanDisk in exchange for being able to sell 1,000 songs for under $100 when the regular bill would be ten times that amount. If you want to keep these songs, you’ll have to record them in real time — hey, just like how regular radio works! — until someone figures out how to crack the card. To SanDisk’s credit, other microSD albums and compilations that it’s selling are DRM-free and can be copied willy-nilly.

All that aside, what you end up getting is a setup that’s good for a) people who don’t care/can’t/are too lazy to download a bunch of stuff and transfer it to a regular player, b) an okay impulse buy at an airport, and c) something to hook up to your stereo if you’re having a party and want to make sure that there’s music to suit anyone’s tastes. I’d consider myself a fairly picky music snob and there are enough tracks on this microSD card to keep me happy and listening for quite some time. There’s plenty of crap, to be sure, but it’s not all crap.

Battery life is rated at around 13 hours, which is accurate (I left the thing playing from 9PM to about 10:15 AM) and the kit includes earbuds, a gel skin case, and a USB cable that plugs into an included AC adapter. The player has no menu; there’s no shuffle or repeat settings, no equalizer, none of that stuff. The audio quality is okay but not great. You get a more-than-capable FM tuner, as well, and you can easily add station presets.

All in all, it’s an interesting concept that serves to bridge the gap between those who download and those who don’t. The interesting thing to watch will be if there are enough of those who don’t that’ll be willing to dip their feet in the digital music pond without getting overwhelmed. While only being able to skip forward over tracks is this whole idea’s Achilles heel, if SanDisk can sell the overall concept to the masses, it just might catch on.