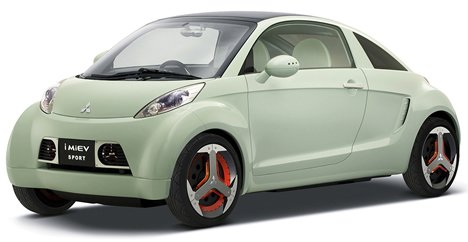 The battle of the EVs draws closer, and while I doubt it’ll the Ragnarok we all hope for, it should be an interesting fight. While Tesla is doing fine selling its high-end Roadster, the real competition will likely be around $40,000, give or take a few thousand. Of course, everybody’s ready for the Volt, but it seems that Mitsubishi is going to beat everyone to the market with the first consumer-oriented mass-produced electric vehicle (as opposed to enthusiast-oriented like Tesla’s models). The iMiEV (bets on name changing after the first year?) should be hitting the showrooms in Japan this Summer, and hopefully we’ll see it on our shores not too long after.

The iMiEV (sport version shown above) is pretty much what you’d expect. Not high-performance like a Roadster, but not an oversized scooter like the Puma or slightly larger “urban transport” vehicles. You can see an older test drive here, which lays out the basics, but essentially it’s a practical electric vehicle with which a family might conceivably be able to replace their Subaru or whatever.

Others are biting at Mitsubishi’s heels, of course, so getting it out there fast is of prime importance. I’ve promised myself that I won’t buy a car until I can get a plug-in electric, but will this be it? And will I have to move to Portland to keep the thing charged?