Youtube is doing everything it can to turn the professionally-produced content on its site into a big source of revenues. Through its Content ID program, it digitally fingerprints the video libraries of 600 content partners and offers those media companies and video creators the option to place ads against any video that contains their copyrighted material. They also have the option to automatically take those videos down, but more than 90 percent opt for the additional ad revenues.

Up until now, those ads were just plain-vanilla banner ads and pop-ups. But starting today, YouTube is beginning to roll out its AdSense For Video ads on claimed content. AdSense for Video ads are contextually targeted to the title, text, and tags on the video, or they can be targeted more broadly by genre. For instance, this user-uploaded video showing cartoon clips of Disco Bear is identified as content belonging to Mondo Media, and the ad I see on the side is appropriately enough for the animated movie The Tale of Despereaux. Unfortunately, that is not the AdSense for Video ad. The AdSense ad is an overlay that pops up at the bottom of the player during the video. All I get right now is a Google filler ad for its Chrome browser (see screenshot above).

But YouTube assures me these will become more relevant as the program is rolled out today. As another example, when I watch this home improvement video about cleaning windows an AdSense text ad for window cleaning estimates sometimes appears at the bottom. This video isn’t claimed content, but it shows how AdSense for Video can turn up more appropriate ads than run-of-site banner ads. You can get weird juxtapositions or bad matches as well (see above). Overall, though, I’ve been able to confirm that the clickthrough rates on AdSense for Video ads are higher than generic banner ads. And, in general, Content ID partners generate twice as many views (and, thus, twice as many ad impressions) for their videos than if they solely relied on their own video uploads and channels within YouTube.

This is just one dial YouTube is turning up as it seeks to shed its cost-center status within Google. Other efforts at YouTube include click-to-buy links, paid downloads, and paid search results. But squeezing dollars from the (growing) sliver of professionally-produced content on the site seems to be an especially fruitful area. Over the past few months, for instance, YouTube has been allowing more and more content partners to sell their own ad inventory inside YouTube on a revenue-split basis. Since I last wrote about this, partners ranging Disney to Machinima have been invited into that particular bring-your-own-advertising program. 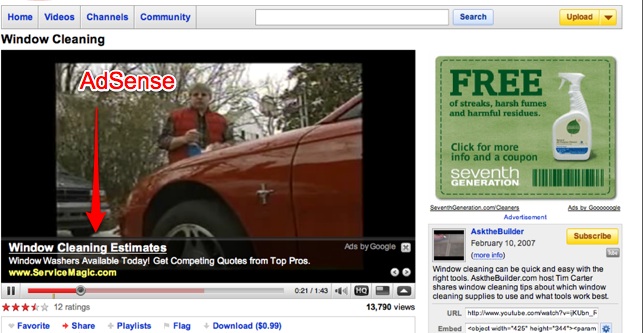