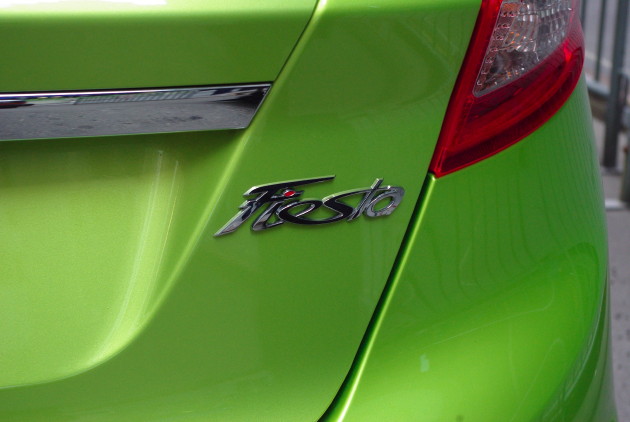 The NY Auto Show kicks off later this week, but we’ve already seen a few things worth mentioning. We’re on the fence about the P.U.M.A., the new GTi from VW is nice (details later today), but the Scirocco would have been a lot cooler and then there’s the 2010 Ford Fiesta. Oh yes, the Fiesta from Europe is coming stateside and it’s looking pretty mean. We had the chance to whip this 4-door hatchback around Manhattan during rush hour and it performed admirably.

Biggs and I actually got one of these last year when we were in Germany for CeBIT and it was pretty meh, but this new one is something different. It’s going to come packed to the gills in three trims and sell for under $14k, give or take. Details and specs are still being tweaked because the hatchback is coming from Europe, which has done really well over the pond, but it’ll have 1.6 liters of teeny ferociousness under the hood, much like a little Chihuahua I know.

We can’t say too much about handling, but it’s tight and responsive. We avoided a few kamikaze cabs and unexpected potholes along our trip to midtown. But we’re not sure how it does on the open road or up in the hills. However, it seems pretty perfect for city folk.

On the tech side of things, the Fiesta packs quite a bit of extras that you probably won’t find on comparable models from others. For instance, Sync will be available along with satellite radio and a sound system by Sony. The kicker for me was the push button start. You also get hands-free calling via Bluetooth and a USB port to plug in your iPod that can be controlled from the touch-screen.

Who’s played Gran Turismo on the PlayStation? Remember the 1996 Ford Escort RS Cosworth from GT3 A-Spec? Yeah, well, the Fiesta is the spittin image of that rally car and it looks aggressive as all hell. Check out the gallery.