Just over a week ago a number of blogs presented us with Hotelicopter, the world’s first flying hotel, featuring a modified Soviet helicopter decked out to create a five-star aerial resort. Of course, this turned out to be a total hoax in honor of April Fools day (albeit an early one) – Hotelicopter is in fact a web startup, and it launches today to the public.

Hotelicopter is a new hotel booking site that allows users to search across 30 travel sites for rooms at over 150,000 hotels. The site is also notable for being the first such hotel aggregator to include Facebook Connect integration, which it can use to power social hotel recommendations and to also let your friends know where you’re staying.

The site has a clean interface, allowing users to use sliding bars to narrow down their search results by price, star rating (based on reviews from TripAdvisor), and checkboxes for amenities you might want (internet access, included breakfast, etc). Prices are clearly noted next to rooms, and users can directly book their rooms without having to jump through other hoops.

All in all, it seems to work well, but there just doesn’t seem to be a whole lot distinguishing Hotelicopter from other sites like Kayak. That said, the people behind Hotelicopter clearly have a good sense of humor (and marketing), so they may be able to make a name for themselves in the crowded space. 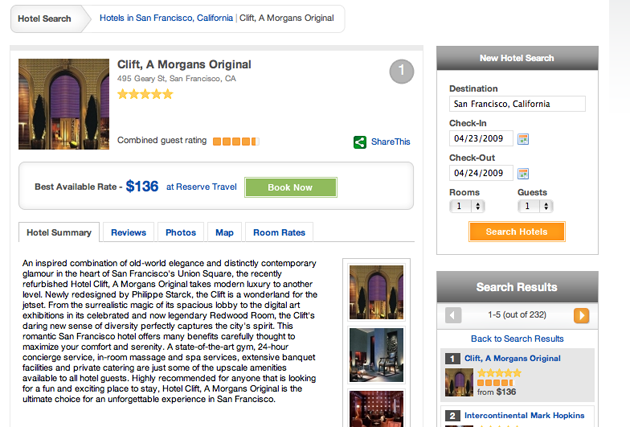