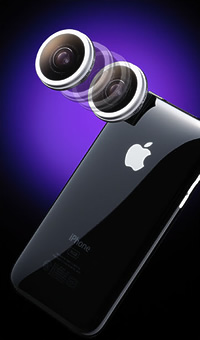 As far as the hardware is concerned, one of the biggest weaknesses of the iPhone is the camera (although I personally think it’s enough to take the occasional shot here and there), prompting accessory makers especially from Asia to come up with add-on lenses. Crunchgear featured these three times so far.

Most of them are cheap and seem to be pretty crappy. But a new conversion lens from a brand called Digital King [JP] looks a bit more promising.

The fish-eye lens can be attached to the iPhone camera through a mount system thats uses magnets and a metal ring. so no news there. But wwo factors hint at an acceptable quality. First, the lens is made in Japan and second, it costs a whopping $100. But no release date has been announced so far.

The video below shows how the Digital King conversion lens works.