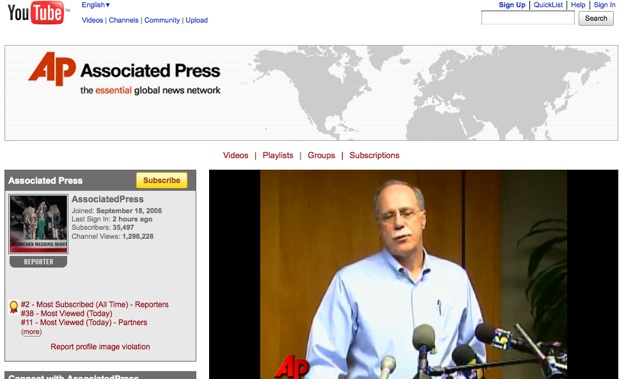 Here is another great moment in A.P. history. In its quest to become the RIAA of the newspaper industry, the A.P.’s executives and lawyers are beginning to match their counterparts in the music industry for cluelessness. A country radio station in Tennessee, WTNQ-FM, received a cease-and-desist warning from an A.P. vice president of affiliate relations for posting videos from the A.P.’s official Youtube channel on its Website. See update below.

You cannot make this stuff up. Forget for a moment that WTNQ is itself an A.P. affiliate and that the A.P. shouldn’t be harassing its own members. Apparently, nobody told the A.P. executive that the august news organization even has a YouTube channel which the A.P. itself controls, and that someone at the A.P. decided that it is probably a good idea to turn on the video embedding function on so that its videos can spread virally across the Web, along with the ads in the videos.

Frank Strovel, an employee at the radio station who tried to talk some sense into the A.P. executive Twittered yesterday:

I was on the phone arguing w/ AP today. We were embedding their YouTube vids on our station’s site. We’re an AP affiliate.

They asked us to taken them down. I asked, “Why do you have a YouTube page w/ embed codes for websites?” Still… they said NO.

The story was picked up by the Knoxville News, and then by a local video producer Christian Grantham, who captured the following Skype interview with Strovel in the video below (which is not an A.P. video, so I am going to embed it). Strovel notes that the A.P. accused the station of “stealing their licensed content.” He sounds flumoxed, as he should be. This back and forth during the interview says it all:

Strovel had to pull down all the videos from his Website.

Update: It looks like the A.P. is backing down and will allow the videos to go up again. The A.P. also sent me a statement saying no cease-and-desist letter was ever drafted. And technically, it wasn’t. The A.P. executive delivered his warning in an e-mail, which had the same effect as a formal letter. “This was a misunderstanding that has mushroomed into something else entirely,” the A.P.’s spokesman tells me. Here is the complete official statement:

There was a misunderstanding of YouTube usage when the Tennessee radio station was contacted by the Associated Press regarding the AP’s more extensive online video services. No cease and desist letter was drafted or sent by AP to the station at any time. The AP was trying to offer the station a superior service for their needs.

In other words, at the same time it was threatening the radio station it was trying to convince the station to use its “more extensive online video services,” OVN, when all the radio station really needs is what the A.P. already makes available on YouTube. The A.P. continues to amaze me. It just managed to shoot itself in the same foot twice. 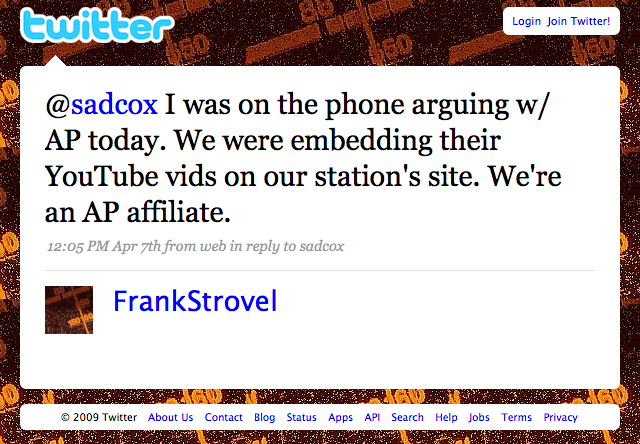 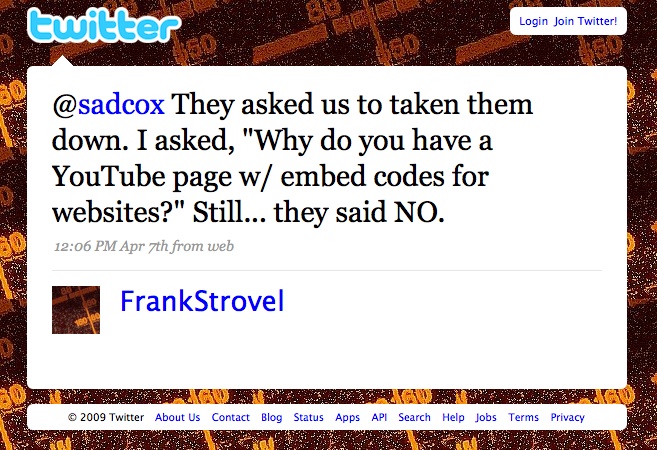