Sugar Inc.’s flagship celebrity news and photo blog,
PopSugar, has launched its 3rd annual PopSugar 100 tournament. It’s kind of like the NCAA’s March Madness, except this single-elimination contest is meant to determine who the most popular celebrities are in a given year.

PopSugar chose 128 celebrities and divided them into four groups and then ranked them from 1 to 32. The potential PopSugar 100ers are then paired up in head to head matches, at which point users can vote on who had the bigger year. Whoever wins will then proceed to the next round and so on through the rounds of Sweet 16, Elite 8, Final 4 right down to the single winner. The first round (you can vote on 64 celebrity matchups) starts today and lasts two weeks. After round one winners are determined, each round will last one week until a winner is declared in June. Readers who vote are entered to win a $3000 Chanel bag with every round they participate in. The winner of the bag also will be announced in June around when the new PopSugar 100 list is revealed. 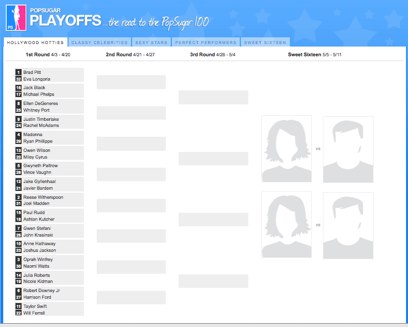