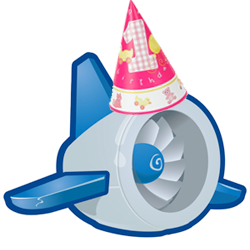 And it has been a good year. Despite the fact that App Engine only supports Python applications, 150,000 developers have flocked to the service, says Google. They’ve launched 50,000 applications, and those apps generate more than 100 million daily pageviews. Look for Java, a much more popular programming language, to come soon. Possibly even this evening.

Google says they eat their own dogfood, too, and have launched nearly 50 projects and small products on App Engine, including Google Moderator and Labs for Google Apps.

Even President Obama has used (well, indirectly) App Engine, using Moderator to gather questions for a virtual town hall meeting on whitehouse.gov. Google says that the site peaked at 700 hits per second, and 92,934 people submitted 104,073 questions and cast 3,605,984 votes. In total, whitehouse.gov got approximately 1 million visits during the 48 hour open voting period.