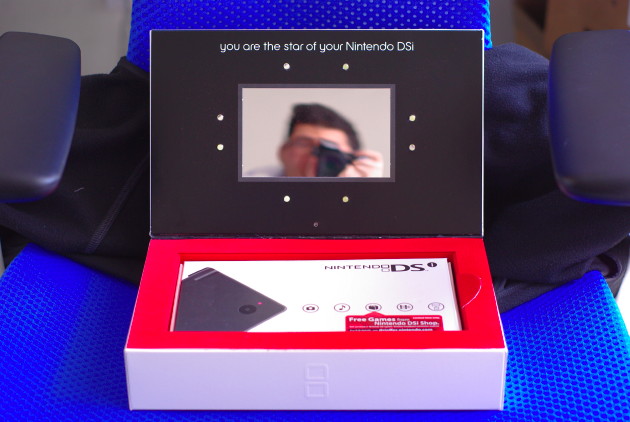 First, apologies for not taking video, but I’m not in range of Wi-Fi, so I hope the picture gallery will suffice for now. I’ll be sure to take video of the DSi menu and all its little treasures later on today.

I’ve been fortunate enough to have manhandled the DSi in Japan back in February and last month at GDC, but having my own to tinker with is something else. I can’t say that I prefer the new menu system to the old one, but it’s growing on me. For those that are unfamiliar with the old DS menu – everything from the system settings to pictochat were all on the same screen. In the new menu system there’s a scrolling slideshow-like setup that requires a little bit of hunting and pecking.

The addition of cameras wasn’t that impressive to me, but the integration into games like WarioWare: Snapped makes perfect sense. And editing images with all sorts of silly add-ons can get addicting. Even for this jaded bastard.

DSi Sound is surprisingly fun to use. Imagine adding jumping Mario or coin collecting blips to Tupac’s “California Love” because that’s what I’ve been doing for the last 20 minutes. There are a variety of other sound effects that you can add to music from your SD card, but you can’t record them. While you’re editing tunes on the bottom screen, the top screen has various things going on that include Mario and Excite Bike. You can control Mario, but it doesn’t look like you can play along in Excite Bike. You can, however, record whatever you feel like in the other Sound mode. I’ll cover this feature more in depth in the upcoming video.

Without Wi-Fi I can’t access the DSi Shop so that will have to wait until the video overview as well.

As far as hardware goes, the DSi feels much lighter and sleeker than the Lite. I especially like the matte black finish and rubbery grip. The camera isn’t great, but it’s not horrible and it’s perfect for what Nintendo intended.

That’s it for now, folks. Look for the video to come a bit later today.