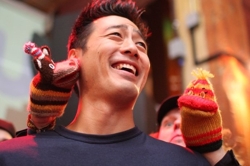 This guest post is written by Larry Chiang, a co-founder of Duck9 who also regularly blogs for for BusinessWeek. In this post, he discusses some of the pros of organizing events as a means to increase your own exposure and make connections.

My party mentor, Susan Roane, the author of ‘How to Work a Room‘, once told me, “Larry, there are two types of people in this world: hosts and guests”. She argues that hosting gets you more influence and adds value at a party. I believe her.

I took it a couple steps further because partying and social engineering intrigue me. I see how people in positions of power use parties to further grow their influence. In this post, I boil down my knowledge and reveal how hosting and producing events can boost your visibility, increase your deal flow and help you sway people.

Getting a bunch of groups together to agree on ONE single deal is very hard because everyone has different agendas. This is a technique where you listen so well that you can extrapolate what they want to say and what they are afraid to say. We do this to better guestimate their agenda.

I know Congressmen who do this so well that they know everyone’s agenda better than they do. Win-wins and ‘best alternative to a negotiated agreement”are what is taught in business school. In the real world, this approach is cloudy and messy.

Learning this technique is essential to producing a party or getting a deal done.

Take Two Down The Aisle.

Venue locations and the people that manage them can be smarmy. By smarmie, I mean they want to monetize you in any way possible. They don’t have enough Friday and Saturday nights in a year and will change your deal the last minute to squeeze you for more money. Solve this by booking TWO venues for the same time.

By taking two venues down the aisle you’re buying a real insurance policy against a deal changing. Your cost is losing the deposit. For example, when I hosted the TechCrunch after party, I chose the Four Seasons.  My back-up location was the Three Seasons in downtown Palo Alto. (You can find more countermeasures in my post, “The Art of Changing the Deal“)

Back on topic, “taking two down the aisle”, I do this with mortgage bankers where I bring TWO down the wire, right to the closing. Yes, your FICO score remains barely affected. The maneuver is outlined here.

Actively love those that love you at the party.

Reciprocate the givers. Avoid karmic black holes. Character compass your guests like a seasoned front desk manager at the Four Seasons in Austin. Character compassing is the skill in determining which direction their soul is pointed. Failing to take this into account can result in a poor experience for your guests.

Set Aside Your Need to Make Money.

Cut and Paste a Theme

Parties without themes are like companies that don’t solve problems. Having a theme unifies the experience and gives direction to an event. The best theme is a time-tested one. I cut and pasted the party theme, “Launch Party 2.0” by changing one word from a hit party in December, “Holiday Party 2.0”.

Get a Celebrity Co-Host.

If you want to attract prominent co-hosts, you have to know their agenda better than they do. If you are not an expert character compasser, then at least yearn to want to know what their agenda is. There’s a secret method to doing this: You listen (and read the material they’ve written). Also, listen to what they tell you to read because it affected them.

Promotion is the Dirtiest Work

A Hollywood agent once told me, “They don’t pay big bucks to act, they pay you to promote”. It was eye opening when I realized that promotion of products or services (or a party) is the hardest work. If you can have your party promote something else, you will curry favor.

Consider being the “Unofficial, Unauthorized Party” and embrace your illegitimacy. I am the writer and primary promoter for the scandalous sequel to “What They Don’t Teach You At Harvard Business School“. Yeah, it is a sequel to a book I did not write. By writing the sequel, “What They Don’t Teach You At Stanford Business School”, it in effect turns Harvard into a friend.

You can use the same technique when it comes to parties. Don’t be afraid to be the unofficial party, or the after-party.

In business, there are often catch-22s. I can’t get funding until have a working website. I can’t get financing for my film until I have a tier one actor. Producing a party is no different.

To battle the chicken or the egg, catch-22 syndrome, I say get a simultaneous close by combining any two or three (or all) of the above seven previous tips.

I was able to be the official Web 2.0 Expo After Party by combining all eight. Now I’m going to offer a chance to win a sponsorship to the Official Web 2.0 AfterParty on Wednesday April 1st. The theme is “Launch Party 2.0. Don’t be Asse9 on April Fools”. Enter by posting in the comments what and how your start-up can benefit from winning a sponsorship. Deadline is 11:11am, 04-01-09. No this isn’t an April Fools joke.