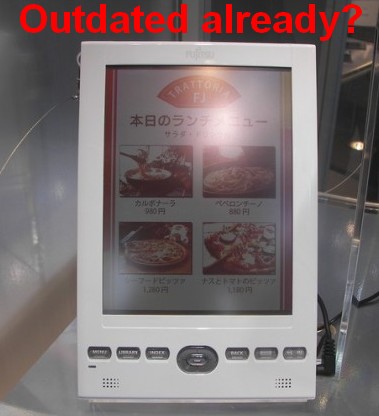 The Kindle 2 is hot in the US, but in Japan color e-paper is the major topic in the blogosphere. The black and white Sony e-reader was a gigantic flop and Amazon Japan hasn’t said yet if it will sell the Kindle here in Nippon.

Fujitsu will attempt to fill the void by offering its FLEPia color e-book (pictured) next month, but now Ricoh claims it has developed a technology that makes it possible to produce color e-paper, which is 50% brighter than conventional devices.

Existing e-paper hardware typically integrates three layers generating red, green and blue light. Each separated by a sheet of glass, using the layers leads to a dim surface, making it harder to read the display. Ricoh says it applied color copy machine technology to e-paper, using cyan, magenta and yellow as the base colors (instead of red, green and blue).

The company claims that squeezing a transparent electrode and the three color layers (separated by insulating layers) between two sheets of glass made it possible to produce a color e-paper prototype that’s not only thinner but also lighter than conventional models. It can also retain graphics after the user turns it off.

Ricoh is planning to get a “practical version” of its color e-paper ready by 2014 (the Japanese company website doesn’t offer any information and there are no pictures of the current prototype).