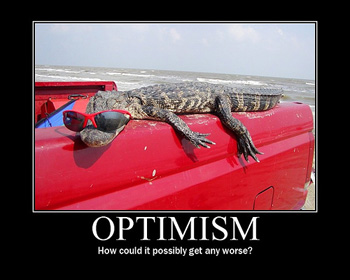 The Pew Research Center’s Project for Excellence in Journalism released a study today that claims bloggers and journalists have an “uneasy” optimism about the future of news media on the web. But, the study says, their optimism definitely trumps that of broadcast and print employees in traditional media industries.

According to the study, most journalists who work in the online news industry believe that the internet is having a negative impact on fundamental journalistic values, including a loosening of standards (45% of respondents felt this way), increased emphasis on speed (25%), and the addition of voices from outside the traditional media institutions (31%). While there’s no doubt that the internet is changing the way journalism is conducted and delivered, I’m hesitant to think that speed and increased diversity of viewpoints from outside the industry is detrimental to journalistic integrity.

Online journalists are cautiously optimistic that their publications have viable business models compared to traditional forms of media. Over 60 percent of respondents reported that their online news units were making a profit. But only four out of every ten online journalists are “very confident” that online news can find a profitable business model for journalism, and are worried about the money-making prospects of internet advertising. Roughly two-thirds of journalists surveyed predicted advertising would be the most important form of revenue for news websites in three years. That in itself might be an overly optimistic projection for online advertising revenues, which today only accounts for less than 10 percent of overall newspaper advertising dollars in the U.S., and actually showed a slight decline last year. Print advertising, however, is diving faster than anyone expected.