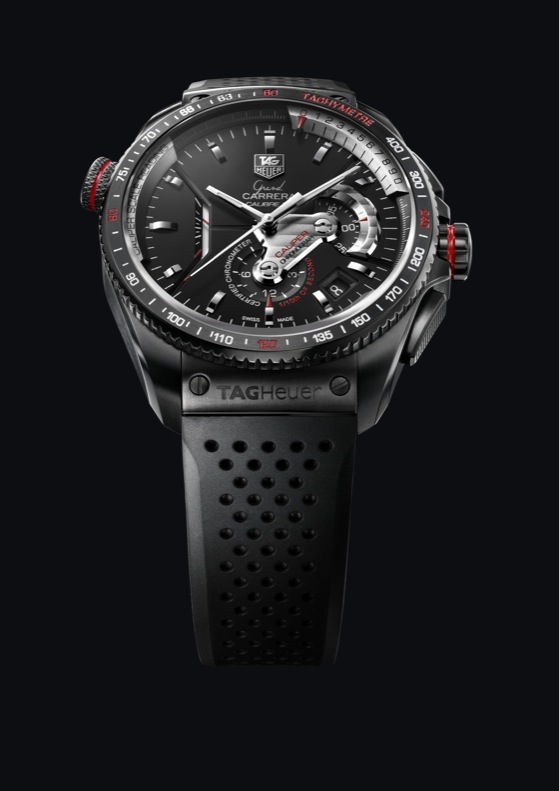 Another bit of news from Tag is the RS2 Caliper chrono Ti2 running the Caliber 36 movement for 1/10th of a second accuracy. The 36 isn’t new – it appeared in 2008 – but the “caliper” system is quite interesting.

The dashboard is a stylish black 43mm dial designed for optimum readability and information. The spotlight feature is the exclusive Caliper Rotating Scale, an ingenious display mode marked by an oversize crown and red line at 10 o’clock that enables precise readings of 1/10th of a second — magnified 10X for rapid readability.

It’s a bit hard to see what’s going on here but this video shows the user rotating the outer bezel to indicate the elapsed tenth of a second. I’m not quite sure why they did it this way unless I’m missing something.

Tag is also releasing a few updates to its Carrera chrono line including a big date GMT model.

At Baselworld 2008, TAG Heuer pushed the concept even further with the Grand CARRERA Calibre 36 RS Caliper Concept Chronograph. The first automatic chronograph in the world featuring Caliper Rotating System, the Caliper Concept is powered by a COSC-certified TAG Heuer Calibre 36 RS, a column wheel movement oscillating at an astonishing 36,000 vibrations per hour, enabling the central seconds hand to tick off 1/10th second intervals. With unparalleled timekeeping accuracy and at-a-glance, cockpit-fast readability, the black-dialed Calibre 36 RS Caliper swept the most prestigious awards in the watchmaking world, including “2008 Sports Watch of the Year” at the Grand Prix de l’Horlogerie in Geneva, “Best Chronograph of the Year” at the 2008

From Concept to Reality: The GT car-inspired concept chronograph that wowed Basel World with its technical inventiveness and futuristic design is ready for rollout.
The bodywork of the Grand CARRERA Calibre 36 RS Caliper Chronograph is pure streamlined simplicity. Under the hood — avant-garde engineering of the highest order. The engine is the same movement that so impressed the watchmaking industry at Basel World: the powerful, COSC-certified TAG Heuer Calibre 36 RS column wheel movement, operating at an astonishing 36,000 vibrations per hour and measuring time to a breathtaking 1/10th of a second.

The dashboard is a stylish black 43mm dial designed for optimum readability and information. The spotlight feature is the exclusive Caliper Rotating Scale, an ingenious display mode marked by an oversize crown and red line at 10 o’clock that enables precise readings of 1/10th of a second — magnified 10X for rapid readability.

Ultra luxury and high-performance details include a linear second counter at 9 o’clock, and a date window at 4:30. The two Rotating Systems, indicating chronograph minutes at 3 o’clock and chronograph hours at 6, are stunning to look at, with high-luxury Côtes de Genève decorations and polished beveling. Other standout features are curved, faceted horns on both case sides, a curved, sapphire crystal with double antireflective treatment and a double sapphire crystal caseback sealed by six screws.

The jet black chassis and bodywork (43mm case, fine-brushed and polished bezel, and fine-brushed and faceted case) are made of grade 2 Titanium (Ti2), an ultra-resistant and biocompatible pure metal twice as light as steel. The oversize crown at 10 o’clock — also in Ti2 — activates the Caliper Rotating Scale, enabling magnified 10X reading to 1/10th of a second.

Other top-end features include a linear permanent second counter at 9 o’clock and a black rubber bracelet with black titanium end piece and folding clasp that grips the wrist the way a GT car hugs the road.