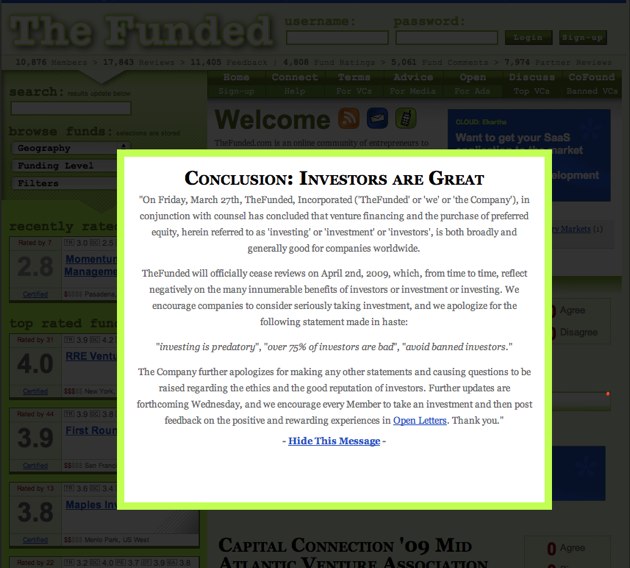 TheFunded, a website that rates venture funds based on first hand experiences from readers, is shutting down on April 2, according to a notice posted on the site today.

This very well may be an April Fools joke, although founder Adeo Ressi has not returned our email requesting comment. The fact that the service isn’t shutting down immediately also suggests this is fake.

The site has been controversial from the start, and many investors have never been pleased with TheFunded. Last August the company was involved in a lawsuit brought by a venture capitalist trying to track the identity of an anonymous commenter.

TheFunded recently opened a new section of the site listing banned investors – that part of the site is no longer live.

We’ll update when Ressi confirms its real or a joke. The last part of the message, below, is so rife with sarcasm that I’m leaning towards it being fake.

“On Friday, March 27th, TheFunded, Incorporated (‘TheFunded’ or ‘we’ or ‘the Company’), in conjunction with counsel has concluded that venture financing and the purchase of preferred equity, herein referred to as ‘investing’ or ‘investment’ or ‘investors’, is both broadly and generally good for companies worldwide.

TheFunded will officially cease reviews on April 2nd, 2009, which, from time to time, reflect negatively on the many innumerable benefits of investors or investment or investing. We encourage companies to consider seriously taking investment, and we apologize for the following statement made in haste:

“investing is predatory”, “over 75% of investors are bad”, “avoid banned investors.”

The Company further apologizes for making any other statements and causing questions to be raised regarding the ethics and the good reputation of investors. Further updates are forthcoming Wednesday, and we encourage every Member to take an investment and then post feedback on the positive and rewarding experiences in Open Letters. Thank you.”