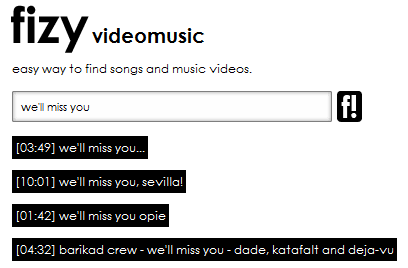 Check it out before it gets blown off the interwebs: Fizy is probably the simplest, most powerful and fastest music search engine I’ve ever seen, and that’s saying a lot. Seemingly designed for mobile browsers rather than traditional web browsers, it lets you dig up virtually any song you’re thinking of and stream it in a heartbeat.

It’ll even display an associated video if it can detect one, and you can easily share songs – which come with dedicated URLs – on a wide variety of social networking services.

That’s about all it does and it does that pretty well; I was even able to find songs from one of my favorite bands, Blackbox Revelation, which is not always the case with these types of new services. Fizy claims it can pull up about 75 billion MP3s thanks to access to over 50 different APIs, and the speed is probably the most amazing thing about it and also the main differentiator compared to the plethora of similar services. Bonus points for setting up the service with an international audience in mind: Fizy supports nearly 30 languages to date.

That makes it as addictive as it is illegal, and that’s why I’ll be missing it when it’s gone. That could take some time, since there’s no address or name mentioned anywhere on the site, although a quick WHOIS lookup points in the direction of Turkish company beril tech.

Update: Fizy was acquired a month ago, by Site A.Ş, a member of Z Group, also the group behind Turkish online advertising agency ReklamZ.

In the meantime, thank you for the music!