Zimride – a startup with a tagline that reads “A Carpool Community” – sounds exactly like the sort of benevolent Web 2.0 service that will never make a cent. As it turns out, since launching in 2007 and winning fbFund last summer, the company has managed to carve out a nice niche for itself that saves its users money, helps the environment, and actually manages to generate revenue. And, unlike some of its carpooling competitors, it has also managed to avoid getting sued by Canada.

Zimride offers an application on Facebook Platform, inviting users on the same network to meet eachother and share a car trip. Users can also visit the service on its website at Zimride.com and find trusted users through Facebook Connect. After entering their current location and their destination, Zimride will generate a list of potential matches arranged by how far out of the way each one wants to travel. Users can also post a destination they’d like to travel to some time down the line, and receive alerts through Email when a match pops up. 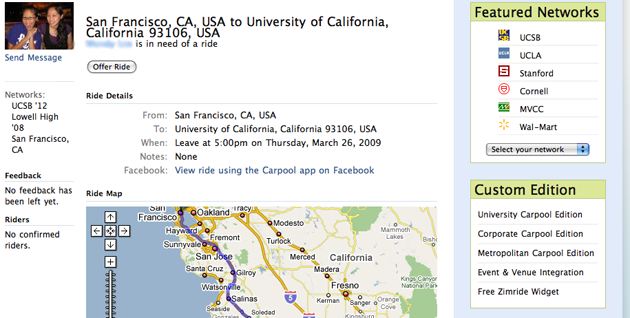 The service is offered for free for up to 50 members per school or company network, but once it crosses that threshold Zimride seeks out the network owner and asks them to pay a subscription fee if it wants to continue allowing its students or employees to use the service. While this sounds a bit risky (Zimride stands a chance at pissing off students if their school decides not to join), COO John Zimmer says that institutions have generally been very receptive to the idea.

The company works with transporation departments and student governments at universities and large companies, and charges universities $9500 a year for the service (they can pay month-to-month). So far, the company has managed to sign up 20 instutitions, including Stanford which has seen over 14,00 new users share 300 rides in three weeks. And aside from earning money as a carpooling company (which is impressive in itself), Zimride is also notable for being a Facebook application that generates revenue through something other than advertising.