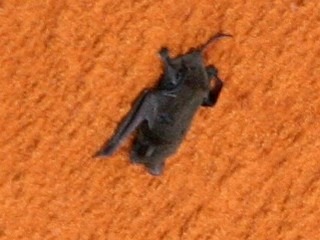 A small bat that attached itself to one of Space Shuttle Discovery’s fuel tanks and “apparently clung for dear life to the side of the tank while the shuttle launched,” according to ABC News. It’s unclear whether the bat was simply in the wrong place at the wrong time or if it had been triple dog dared by some of its friends. Whatever the case, nobody’s located the remains of Space Bat yet.

The bat’s heroic stupidity will undoubtedly pave the way for nervous mothers everywhere to exchange the phrase “If your friends jumped off a bridge, would you?” with “If your friends clung to the fuel tank of Space Shuttle Discovery while it accelerated to 17,500 miles per hour in eight minutes, would you?” when explaining to their children why they’re not allowed to ride their bikes in that nearby construction site.

The bat’s escapades normally would have been captured in pictures but the shuttle’s tank-mounted camera broke during liftoff. Conspiracy? Probably absolutely. If there’s a live bat flying around in space, it’d cause everyone to panic and nobody would ever want to go on those space tourism trips. As such, experts are saying the bat is probably dead.