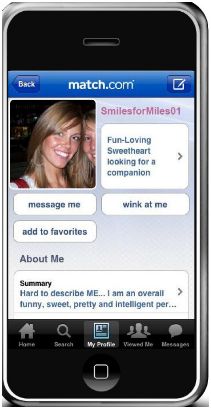 Online dating site Match.com is releasing a native iPhone application for its 15 million members to date on the go. The app allows users to edit their profile, upload photos, and even has an opt-in to a location based feature that allows them to see singles in their area.

The last feature seems to be the most innovative one-there is definitely a market for location based dating on iPhones and other smart phones. We wrote recently about Skout, a location-based dating iPhone app, and said that location based dating might be more successful and appealing via big dating sites like Match.com and eHarmony. Now that Match has unveiled its new app, we think this could become really popular amongst its exisiting member and perhaps even draw new ones.

Match.com hasn’t been slow to jump on the mobile bandwagon. In 2007, the dating site launched its MatchMobile service, which provided subscribers with text messages to their phones when they received an e-mail from other Match.com users.