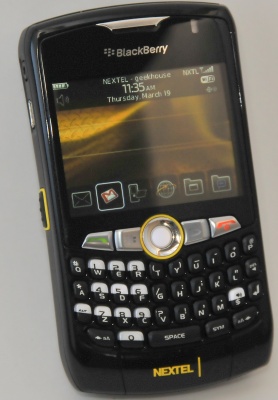 Nextel users usually have terrible phones. We don’t get the cool phones like the G1 or the iPhone. Instead, we get mostly Motorola stuff, and even those are typically the ‘industrial design’ versions. Even the smartphones usually stay away. Until recently, the only Blackberry you could get as a Nextel user was the ugly and awkward 7100i, which didn’t even have a QWERTY keyboard. Well, if you’re like me and you were waiting for a newer style Blackberry to be released be happy, the time has finally come.

Design wise, the 8350i is exactly what you’d expect from an 8300 series phone from RIM. It’s roughly the same as a Curve, with some differences. The handset is a little larger, most likely due to the electronics for the push-to-talk features that Nextel users are so familiar with. It’s also got a bit more bulk to it, but it doesn’t feel that much different unless you’re holding an actual Curve in the other hand. Nextel needed a couple of changes to make it fit with their product line, there’s the push to talk button located on the left side, and outlined in yellow just to make sure you don’t miss it. The edges are covered in rubber, I assume intended to add that ‘ruggedizing’ that we all want on our Nextel phone.

The good news is, the screen in the same as the Curve, namely easy to read and very bright. Sound quality is excellent, regardless of if you are making a standard voice call or using push to talk. The speakerphone works well, the keyboard is ‘clicky’ and has good tactile feedback. There are a couple of things that are a quirky however, the Curve’s standard 3.5mm headphone jack has been replaced by a 2.5mm port. Since the earbuds that come with the phone are frankly not the best, that makes upgrading a bit of a pain. Also, since the Nextel network is not necessarily the fastest when it comes to data transfers, you’ll want to use the built in wifi radio whenever possible. This will also save you on the data plan charges. 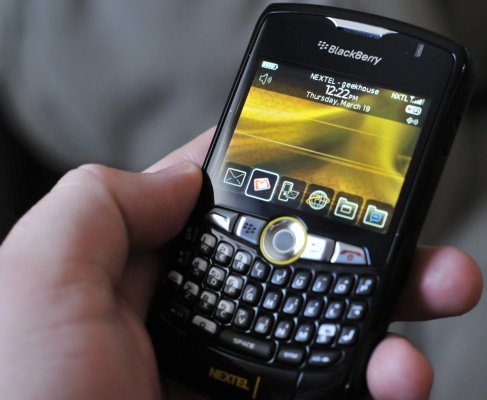 The best news is, the 8350i runs the latest version of the Blackberry OS, which uses the same menu system as the Bold. Now I’ve been using Blackberry devices for years, and I have to say that the latest version of the OS is the most intuitive I’ve ever experienced. It also means that the 8350i is preloaded with AIM, GoogleTalk, Yahoo messenger, and Handmark’s Pocket Express aggregator.

If you are a Nextel user, and you’re looking for a smartphone, you can do much worse then the 8350i. Personally, I really like the phone and I’m glad to see that Sprint is trying to get some better equipment available to the Nextel masses. All we can do is hope they stop trying to sell that awful 7100i.
[PSGallery=4fw7i1mn3s]