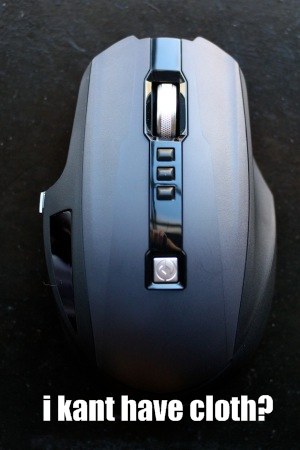 Some of you may recall that I had two major issues with the Sidewinder X8 in my review. I promised I’d post an update once I’d gotten a spare unit and tried some things out. Well, here you go! The good news is that the primary problem has been solved. The bad news: the spare unit has a different problem.

The dealbreaker for me with the X8 was that the tracking was bad. It skipped around and I couldn’t make it stop with any combinations of settings. Fortunately, that seems to have been an issue not with the mouse, but with the mousepad I was using. Commenters in the review noted that Bluetrack mice have had issues with cloth mousepads. Really, now — raise your hand if you have a cloth mousepad. It’s okay, nobody can see you. I bet a bunch of you do. I like cloth mousepads — they’re soft, they don’t accrue grime, and they make no noise at all when you drag the mouse over them. I don’t want to use some weird hard mousepad or a slab of marble just because my mouse is finicky! Fortunately, I find that a nice big hardcover book works very well as a temporary mousepad for review purposes.

Still, it’s a major boost for the X8: my primary concern has been nullified for the most part, so you guys can rest easy if you already ordered one. The other concern, however, was the scroll wheel, and buddy the one on this replacement unit is even worse. Actually, it feels a lot more tightly fastened than the first one I got, but this one only works if you go fast. If I go one notch at a time, it just doesn’t work. You can imagine how frustrating that would be in a game, where swapping weapons is often done with precise spins of the wheel. I’ve tested several configurations and reinstalled the driver as well. 0 for 2, then.

So my recommendation for the X8 is raised from “not at all” to “give it a try.” Seriously, though. Microsoft . You need to get some QA on these scroll wheels, these two feel totally different and neither one works right.