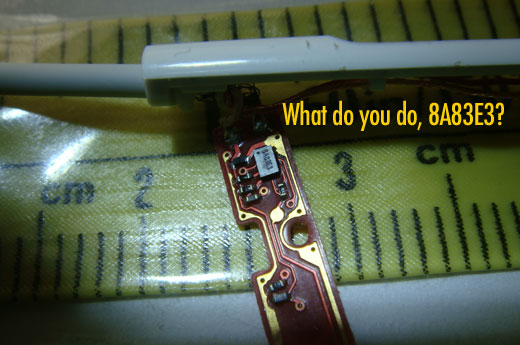 J&R over at BBG dissected the iPod Shuffle’s tiny headphone control system and found an unidentified chip, marked 8A83E3, that appears to be some sort of proprietary digital control that prevents unauthorized transmission of commands to the Shuffle without an official Apple adapter. If this is true – and it seems old in-line adapters don’t work with the Shuffle, which makes us believe that this proprietary to the Shuffle – this is kind of a big deal. Even if we’re talking about a lock-in, it’s a fairly egregious example of forcing compliance.

If anything, this could simply be a tiny buffer that reads and transmits button clicks. Unfortunately, this also prevents manufacturers from producing bargain basement adapters and, in a way, counts as a fairly egregious Apple tax. Quoth BBG:

It is possible the new Shuffle headphones simply send a pulse or other analog electrical signal to the headphone jack of the Shuffle, but we do not have the equipment to determine that ourselves. (Put a multimeter on the second ring of the new headphones, though, and you’ll at least be able to see if different button presses causes different resistance, implying the controls work with analog controls, not a digital scheme.)

But it is also possible the signals are digital. “Digital” does not mean “encrypted”, however. If the signals are not encrypted, then there would be no legal impediment to manufacturers making compatible and unlicensed headphones that work with the new controls. (Either way, regular audio headphones still work, although without controls they’re useless on the Shuffle.)

Apple has a long history of creating “authenticated” hardware and this definitely could be a situation where Apple is adding lock-in controls to their hardware if not actual DRM.

UPDATE – The chip doesn’t seem to appear on Octopart. Even if this is not a DRM chip per se, you cannot use old Apple in-line controls with the new Shuffle which means that Apple has changed the methods involved in sending clicks to the Shuffle. Be it an encrypted scheme – unlikely – or a buffered digital stream – more likely – this is a lock-in what no one really expected.